There’s also the constant suggestion that Sulthan is The One, with a Baahubali-esque scene in which the baby is held aloft by the uncles.

It’s impossible not to spot the mythological underpinnings in Sulthan. As Sulthan (Karthi) asks a cop, what if Lord Krishna had taken the side of the Kauravas? What if he had won them over and helped them reform, not through war, but through affection and advice? Much before you notice that his girlfriend in the film is named Rukmini (Rashmika), you realise who Sulthan is in this film, and who his 100 violent uncles are. He’s also likened to Abhimanyu at the beginning, as his mother (named Annalakshmi for a reason), pregnant with him, talks of wanting to reform all the murderous men in their family. There’s also the Mahabharata idea of Sulthan being forced by circumstances to fight his very own uncles. There are Ramayana references too, with Sulthan getting dubbed ‘nooru thalai Raavanan’. The corporate villain who calls him this, dubs himself an ‘oththa thalai Raavanan’, and says he can purchase as many heads as he wants for money.

There’s also the constant suggestion that Sulthan is The One, with a Baahubali-esque scene in which the baby is held aloft by the uncles. Random strangers in a village, call for him to rescue them from killers who want to burn them all down and grab their land for the benefit of a greedy capitalist. Sulthan himself is constantly wrestling with notions about his identity. He has studied robotics and wants to return to the city, but does he want to leave home? Can he suppress his own violent instincts, nurtured so lovingly under the tutelage of his vicious uncles? I quite enjoyed that the last scene you see before the interval has him looking quite confused, as he comes to grips with the gravity of what he has just done. These are fascinating portions in Sulthan. I also liked that the film speaks of reformation and rejects the notion that people are bad by nature and cannot be remedied. At the foundation of this film is the almost mythical relationship between Sulthan and his uncles, with there being half-hearted attempts to show these men of violence some empathetic understanding. 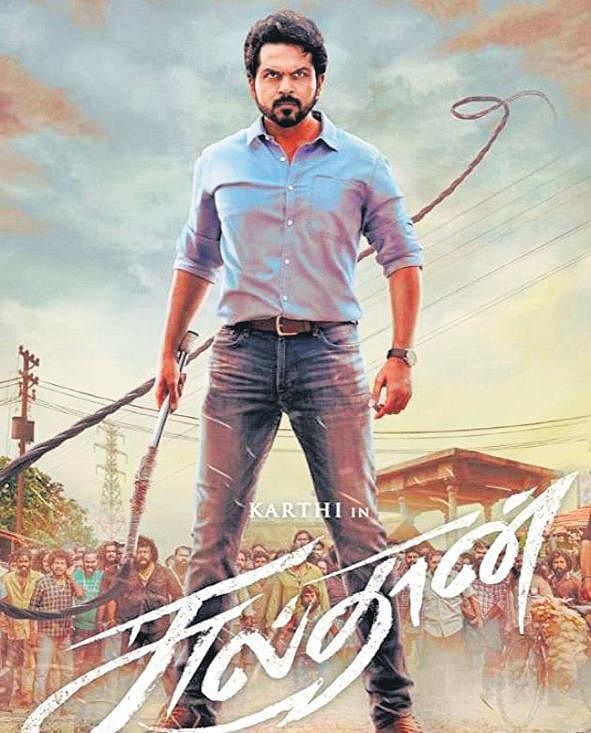 The same film that argues for their humanity, also keeps undercutting it by showing them as creatures driven by bloodlust. In one scene, they are all sleeping, but the mere whiff of a blood drop is enough to get them all aroused. Sulthan is also often shown whipping about his beloved uncles, like they were cattle to be shepherded. He’s also shown treating his bodyguard like a pet dog, and in one scene, even has the latter jumping into a river to recover a stone he flings into it, only so he can get some privacy. When we remember that Sulthan accuses his father (Napoleon) of leading men to slaughter, it’s hard not to wonder how different he is, when, for his mission, he commands his bodyguard to fight till death? Had these all been peripheral characters, it might not have mattered as much, but they are all—to the credit of this film—very much in the thick of things. Given that the central objective of the narrative concerns the reformation and humanisation of Sulthan’s violent uncles, should this film not have resisted the easy temptation to paint them as Sulthan’s marionettes? Should this film not have avoided the background sound of a buffalo grunting when Yogi Babu’s character gets shown?

Even disregarding these problems, Sulthan’s premise could have made for great masala cinema, had it been more thoughtful about its many masala elements, including its love angle, song picturisation, messaging, fight choreography, and most importantly, villains. The premise leads to some clever story ironies: like Sulthan having to take up arms in order to prevent his uncles from doing it, but look at the attention, or the lack of it, given to Rukmini, who, for all the passion she has for her land, gets to do precious little except making angry, ‘cute’ faces at Sulthan. No wonder then that he calls her an ‘angry bird’. A woman surrounded by violent strangers—and with a father who prioritises his mission over the safety of his daughter—nobody, not even Sulthan, seems to worry about her discomfort, all of which gets dismissed as ‘adorable anger’. As Sulthan says in a scene, “Podi mutta kanni.”

While you understand why the energetic opening number is picturised the way it is, the love songs feel only like commercial compromises. As for the action set-pieces, the film does better here. I quite enjoyed the ideas that set them up, more than the fights themselves. I liked that Sulthan’s choice of weapon in the opening fight is a bullock cart axle. I liked the whole ‘silent fight’ conceit of another set-piece. And even in that wrestling duel between Sulthan and an uncle, there’s plenty of emotional strength that serves as fuel. I wish though that we do away with the idea of people bouncing off the ground in these fights—or at least show restraint in shooting them. It’s hard to feel thrilled about Sulthan finally cracking the whip, literally, when you are also fighting laughter at how the bad men are bouncing away like rubber balls. Among the biggest issues in this film is—and how many recent films have we said this about—the simplistic, superficial messaging about the importance of farmers. The idea of violent men choosing sweat over blood is interesting, but the generic virtue-signalling only trivialises it all.

Perhaps the biggest problem in Sulthan is its charmless villain duo. One is a paid hand, like Sulthan’s uncles in a sense, while the other, his boss, is the Evil Corporate Boss ™. The former is the sort of bad man who is kind enough to call in advance before he strikes, so Sulthan can prepare and wait. The latter, meanwhile, is a generic suit-clad evil man, who’s more bark than bite. But hey, after Bhoomi, I guess we should just be glad that this corporate boss at least doesn’t urinate into living room flower vases.

Sulthan is a film that likely would have benefitted without these cardboard cutouts, and with more focus on the Sulthan-uncles relationship dynamics. How can he save them? How can they resist years of indoctrination? What does he need to give up? This is, after all, the main premise of this film, and one that screams of potential. However, Sulthan, the film, isn’t just content with turning them into farmers; it also wants to raise pro-farming slogans.

The film keeps seeing the world in binaries: science or farming, city or village… Sulthan is shown to step away from his world of robotics. Rukmini speaks with distaste about life in a city like Mumbai or somewhere in America. In dealing with simplistic, populist messaging, the film fails to expound its promising premise. If it had not been led astray by its temptation to preach, Sulthan’s uncles may actually not have turned out to be lifeless creatures of violence who are utilised simply to propel Sulthan’s status as a saviour. They might actually have come across as real, complex men, who are more than the violence they are hired for. Isn’t this, after all, what Sulthan wanted for them?

Now we are on Telegram too. Follow us for updates
TAGS
sulthan review Karthi