The tonality and treatment are self-explanatory, with the story woven around a series of pranks, as hidden cameras capture the bewildered reactions of people.

Remember the Candid Camera TV show hosted by Allen Funt? For those who have missed it or want a Thursday Throwback moment, comes Bad Trip from the school of Jeff Tremaine, the co-creator of Jackass. The tonality and treatment are self-explanatory, with the story woven around a series of pranks, as hidden cameras capture the bewildered reactions of people. This is not a film for those who seek story or sensitivity. Bad Trip, akin to the Jackass films and the more high-profile hidden-camera film franchise, Borat, thrives in its absurdity. 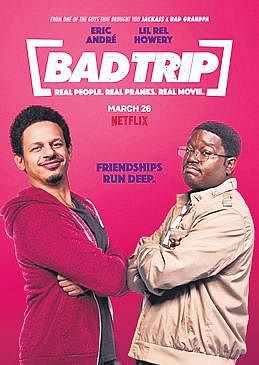 When Chris Carey (played by stand-up comedian Eric Andre) runs into his high-school crush Maria Li (Michaela Conlin), he is struck by a revelation to try and make up for all the years he has wasted. In an attempt to win Maria’s love, Chris sets out on a road trip from Florida to New York with his best-friend Bud Malone (Lil Rel Howery). For their commute, the duo steals a car owned by Bud’s sister, Trina (Tiffany Haddish), who is serving time in a prison. When Trina escapes prison and sets out to chase the duo, the best buddies must deal with an additional impediment in their bad trip.

This film is not about story and character arcs. Profundity is not its ambition either. All it wants to do is get us laughing, and there, it delivers, with each prank outdoing the previous one. From Chris throwing up in a bar, which leaves the guests disgusted, to Trina seeking the help of a kind-hearted wall painter during her prison break, the pranks look better than they sound. The ‘real’ reactions of the ‘real’ people work on multiple levels too. The situations are forced into. Ranging from downright ridiculous to sensationally gross, they drive a certain level of enjoyment. Also, our knowledge that the set-pieces are pranks keeps us a step ahead of the onlookers, which enhances our amusement.

The intent to deliver comedy is evident across this film, with most of the attempts landing. It’s not The Darjeeling Limited, but it doesn’t pretend to be one either. Instead, Bad Trip embraces its identity with self-awareness. The real problem is when this film tries to bridge all this absurdity with sensibility towards the end. While comedy is largely subjective, it’s quite hard not to be entertained by a film like this which unabashedly shows you the ridiculous—like, say, a gorilla attempting to mate with a man. In all, Bad Trip is a fairly good ride.

Now we are on Telegram too. Follow us for updates
TAGS
Bad Trip

'99 songs' movie review: This musical misses a lot of notes