However, Ninnila Ninnila isn’t just about food. It is also about friendship, family, and love.

George Bernard Shaw once said, “There is no sincerer love than the love of food.” Watching Ani IV Sasi’s debut film, Ninnila Ninnila, it is easy to be convinced of the veracity of that statement. The film is filled with beautiful visuals (courtesy cinematographer Diwakar Mani) of food being prepared, served, and relished. From steaks to soups, biryanis to pastas, plain-old sandwiches to a strawberry-topped decadent chocolate cake, each dish in Ninnila Ninnila is a delight. However, Ninnila Ninnila isn’t just about food. It is also about friendship, family, and love.

Ani wastes no time to pull us into the world of Dev (Ashok Selvan) and Tara (Ritu Varma). Dev is the yin to Tara’s yang. The names are reminiscent of a similar yin-yang story from 2015 - Tamasha. But unlike the Imtiaz Ali film, Ninnila Ninnila isn’t just about one person in a relationship giving it all to help the other find the ‘true meaning of life’. This is about two souls trying their best to face their adversities with a smile and a half. While Dev, who suffers from sudden muscle spasms, is messy, reckless and clumsy, Tara is perfect, dainty, and frowns on disorder. 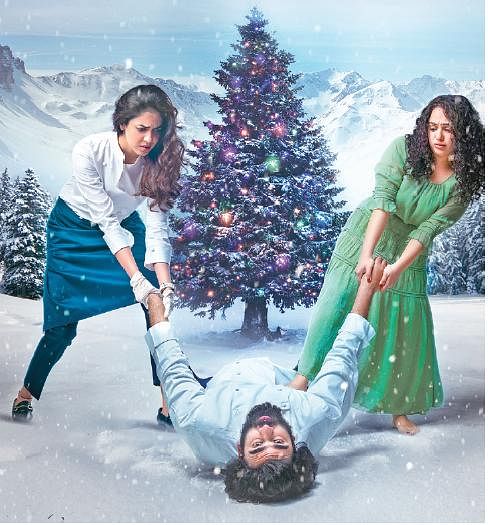 Although this is definitely the base of the film, it is impressive how Ani adds flavoursome layers to this. These work not only as individual stories, but seamlessly mesh into the overall scheme of things too. There is a constant unearthing of new layers as the film progresses and these asides are what help Ninnila Ninnila stand out despite the cliched love story of polar opposites at its core. The best part of Ninnila Ninnila is how, despite a number of such sub-plots, it never once stops being a film about food. Dev and Tara work under Nassar’s head chef in a restaurant called Amara.

We are introduced to the turbulent life of the head chef, whose estrangement from his family pushes him to harbour suicidal thoughts. We also meet the fun-loving chefs of Amara (Satya is a hoot) who add the necessary flavour as the film slowly picks up steam. The writers take their time to establish how Dev’s eccentricities and culinary talent slowly help him win over his colleagues and the head chef himself. When they taste Dev’s food, some of them almost shed a tear. It might all seem a tad too much, but then, Shaw’s lines come to mind.

If there is something that challenges that famous quote, it is the presence of Maya (Nithya Menen). She brings in a form of sincere love that, on paper, definitely seems outlandish. But again, what is love without a willing suspension of disbelief? When this particular thread unravels, there are a few films we’re reminded of, especially, in a weirdly fun way, the classic 2007 film, Ratatouille. A hat-tip of sorts is given to that film right in the first few scenes. But this doesn’t take anything away from the film which mixes elements of loss, longing, and love in equal measure.

It is beautiful how Ani’s writing ensures every loss is balanced by a gain. This might not happen in real life, but what is cinema without a willing suspension of disbelief? The loss of a father is compensated by a father gaining his child. The loss of a loved one during the warmest of mornings is balanced out by finding love in the coldest of places. This dualism is wonderfully brought out by the performances of the competent lead actors. If Ashok adds infectious charm to his understated sadness, Nithya sells the OTT saccharine goodness without turning her character into a caricature. Ritu aces a role that requires her to be both stoic and sensitive. Nassar brings in the necessary gravitas to his small, yet important, role.

Composer Rajesh Murugesan, known for Premam (2015), repeats the magic he created with that Nivin Pauly-starrer and elevates the simple to special. The film does the same as well. Ninnila Ninnila celebrates the simple joys of life. It could be chefs channelising their inner Salt Bae to marinate a simple bowl of soup. Or parents understanding the dreams of their child after tasting a simple plate of scrambled eggs. Or even friends jamming to one of the most iconic rap songs, dancing their hearts out with the most simple of steps. Ninnila Ninnila does an excellent job of elevating the simple to special, and ensures a liberal dose of smiles, guffaws, sheepish grins, and tears as we navigate the lives of Dev, Tara and Maya. And for doing it all without much fanfare or fuss, here’s a chef’s kiss to the entire team.