High points hit us out of nowhere, and just when we believe the pace will pick up, actor- director Bugs Bhargava Krishna takes a detour and slows down the proceedings.

Crescendo — the progression of any good legal drama can be described by this one word. The intensity should increase with every scene and end with the lawyer making a compelling argument that results in either applause or pin-drop silence.

However, in Nail Polish, the progression is intriguing. There are extended moments of nothingness that are, interestingly, anything but dull.

High points hit us out of nowhere, and just when we believe the pace will pick up, actor-director Bugs Bhargava Krishna takes a detour and slows down the proceedings.

While this sine-wave-of-sorts mode has the potential to derail the film, the genre-shifting nature of the proceedings serves Nail Polish quite well.

The film begins with a person found in a pool of blood, and lawyer Siddharth Jaisingh (a wonderfully restrained Arjun Rampal) rushing frantically to the hospital. Over the opening credits, we see news clippings of gruesome deaths of migrant kids.

Soon after, we see a specially-designated task force nabbing the killer… a dogooder, ex-Armyman, kids’ sports coach, Veer Singh (a brilliant Manav Kaul). There is quite a bit of non-linear narration in the first few minutes of the film that proves to be a distraction, but everything is soon reined in. 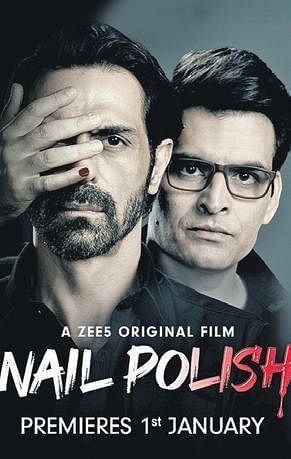 The court sequences in Nail Polish are wonderfully restrained and it helps that Arjun is excellently complemented by Anand Tiwari’s public prosecutor Amit Kumar. One of the layers explored in this legal drama is the economic disparity between Amit and the hotshot lawyer Sid, who takes on this case just to gain political mileage. It is disheartening that this political angle isn’t explored enough though. While we see a lot of to-andfro between these lawyers, ably balanced by Judge Kishore Bhushan (Rajit Kapur), the film unexpectedly swerves into territory that explains the title.

There is also a parallel story between the judge and his wife, Shobha (Madhoo), which feels odd in the overall scheme of things. However, this digression comes with a payoff, and that is where the writing of Bugs stands tall. Of course, there is an unnecessary song here and a predictable unravelling there, but no story arc is left incomplete. Even if it feels there is one layer too many in the film, Bugs manages to tie it all up. What keeps Nail Polish actually ticking till the very end are the consistently good performances. From the moment this legal drama enters the psychological thriller zone, the responsibility of holding it together is thrust on the able shoulders of Manav Kaul.

As Veer Singh, Manav turns in an impressive performance in a demanding tightrope of a role. Even a slight misstep could have relegated the role of Veer Singh to a caricature. But Manav ensures that the audience is left guessing about the character’s innocence. Is Veer Singh really a paedophile who also kills his victims? Is he the victim of a political game? Is he a person who harbours too many secrets? Is he actually grappling with severe childhood trauma? The very fact that in a runtime of 120 minutes, Manav doesn’t drop the ball even once speaks volumes about his acting chops.

Meanwhile, Arjun, as a cocksure lawyer with daddy issues, does well selling both the overconfidence and the vulnerability when he finds himself at a loss for words on more than one occasion. Also, for a courtroom drama, there are more silences than fiery dialogue exchanges, and the background score by Sanjay Wandrekar enhances the experience.

It is also interesting how legal dramas in Bollywood are slowly giving prominence to the judges too. Rajit’s Judge Bhushan has a heroic moment here. Nail Polish stops just short of being a riveting psychological legal thriller because the thrill elements are exhausted too early in the film. After a point, we are left to play the waiting game despite knowing where the film is headed. But thanks t o Manav, this wait feels worth it… almost.

Now we are on Telegram too. Follow us for updates
TAGS
Nail Polish Nail polish review