'Tribhanga' movie review: A poignant tale of mother and daughters

She needs peace at home. She is also a loving mother who wants to be loved both as a woman and a writer. Indian society generally restricts mothers to one dimension.

These flaws are continually impressed upon them by the patriarchal society. Over the course of 90- odd minutes, Renuka paints a striking, yet poignant picture of the pressures of motherhood on women who want to live their lives on their own terms. Tanvi Azmi’s Nayantara Apte is a Sahitya Akademi-winning writer who loves to write. She needs peace at home. She is also a loving mother who wants to be loved both as a woman and a writer. Indian society generally restricts mothers to one dimension. 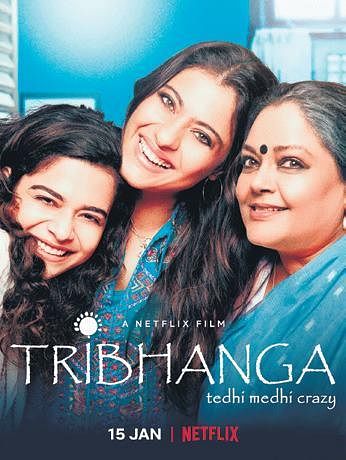 Nayantara refuses to conform to this, and neither society nor her daughter Anuradha (Kajol) is happy about it. Although Anuradha avoids making the mistakes that Nayantara did, it doesn’t stop her too from ending up as a ‘bad mother’. The film starts with Nayantara commissioning a young writer Milan (an interesting role for the usually uber-cool Kunaal Roy Kapur) to help write her biography. Being a straightforward person, Nayan says, “Our memory hides our faults and makes the good in us larger than life. It’s important to know the viewpoint of someone else.

I want to give my children the opportunity to diss me to their heart’s content.” And that they do when Nayan ends up in a coma after a brain stroke, prompting her entire family to descend to her hospital room. It is in this chamber that we see palpable gloom suddenly oscillate between relentless rage, unadulterated happiness , and tear ful breakdowns. The cycle of daughters trying to be better mothers for their own daughters was recently explored in Vidya Balan’s Shakuntala Devi. Here too, the ‘faulty’ mothers are people who are geniuses in their own right.

If Nayantara is an awardwinning writer, Anuradha is a maverick actor-dancer. This brings up the question of whether we can ever see a ‘normal’ woman being a ‘bad mother’. It is always the go-getters, achievers, and geniuses who are questioned about their motherhood, suggesting that if not for their drive to be independent, they’d have been excellent mothers. How I wish we’d get the toxicity of normal parents portrayed on screen. While the content suffers from being stretched a bit too much, the performances make Tribhanga a decently engaging watch.

Shweta Mehendale, who plays the younger Nayantara, delivers a wonderful performance, which is expertly taken over by Tanvi in the older portions. There is considerable restraint from Tanvi even as her Nayan is literally shoved out of Anuradha’s life after being called a “sick woman” and a “bloody b*tch”. Kajol, in her digital debut, goes a bit OTT in her delivery of a confused role. Nayan calls Anuradha stone-hearted and rude, and Kajol portrays that to a T. She cusses incessantly, and is unabashedly hostile to almost everyone. She is happy her mother is in a coma because Nayan is finally in “a silent zone.” However, it is in those little poignant moments where Anuradha finds herself in conflict with the self that we see the powerhouse performer in Kajol.

Take, for instance, the scene where she wakes up from a nightmare about a childhood trauma. Her compelling performance in that scene makes us understand how even imperceptible things can trigger a survivor. When she says marriage is “societal terrorism,” you kind of agree with her. Nevertheless, it is disappointing that Kajol’s turn as a foul-mouthed daughter is explored better than her role as a mother to a hapless Masha. Although Masha acts as a bridge of sorts for Anuradha to realise her mother was a woman first, Mithila, who plays the role, gets a raw deal overall.

The resolutions in the film are too easy. One breakdown and a few tears are all it takes for characters to apologise to and forgive each other. The allis- well format doesn’t gel well in a film that manages to go quite the distance in exploring strained relationships between mothers and daughters. Tribhanga deals with helicopter parenting, the drawbacks of being in a dysfunctional family, and the price a woman pays for having a cavalier attitude about parenting and family.

The fathers are not questioned much, but that’s because Renuka prefers keeping the spotlight firmly on the mothers. It isn’t that fathers are let off the hook, it is just that in the Apte family, fathers don’t matter much. In a particular scene, Nayan says, “Sometimes I wish my children were my characters so that I can write them the way I want to, and make them love me.” We are not used to such truths from our onscreen mothers. We are tuned to seeing them as ideal beings. Through Tribhanga, Renuka and her wonderful ensemble show us that mothers are multidimensional and as flawed as any other human. “Mere paas maa hai” doesn’t strike quite the same chest-thumping note anymore, and that’s okay too.

Now we are on Telegram too. Follow us for updates
TAGS
Tribhanga Tribhanga review

'I Care A Lot' review: This Rosamund Pike-starrer knows how to con you right

'Thirike' review: A fresh take on a familiar tale of brotherhood

'Check'  review: This Telugu flick is not as clever as a chess movie should be