More baffling than politics is Indian actors and filmmakers playacting at the thing. The trend is not new, but lately, it has posed a strange challenge for film critics.

More baffling than politics is Indian actors and filmmakers playacting at the thing. The trend is not new, but lately, it has posed a strange challenge for film critics. Reviewing Tandav last week, I had called Ali Abbas Zafar’s web series ‘mild and light-weight’. So mild, in fact, that it has now drawn four FIRs and resulted in an unprecedented deletion of scenes. Will Madam Chief Minister — which stars Richa Chadha as a Dalit politician in Uttar Pradesh — meet the same fate? Let me get back in a week.

Subhash Kapoor’s film begins with a Dalit man being gunned down the same night his daughter is born. The girl – fourth in a row – is rescued from infanticide by her mother, who accepts her as the will of God. Tara (Richa Chadha) exhibits a rebellious streak from the start — cropped hair, sharp tongue, unwieldy bike. Her relationship with an emerging student leader (Akshay Oberoi) ends when he refuses to marry her because of her caste. Tara rebels, but is brutally attacked. 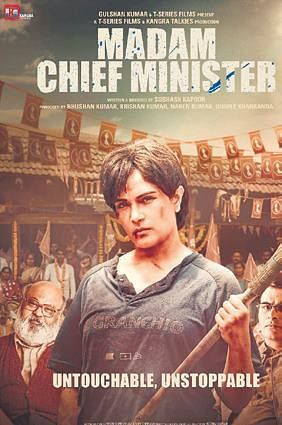 It’s here that the film stops beating around the bush, confirming the Mayawati parallel with the arrival of Masterji (Saurabh Shukla), a Kanshi Ram-like figure who rescues Tara and makes her his protégé. Subhash, who had made the littleseen cricket film Say Salaam India in 2007, uses a sports-movie template for Tara’s rise. This leads to an awkward montage where she trains — not in yorkers and drives — but Marx and Ambedkar.

Her delivery on stage is cricketer-like: hand gestures tracing the swing of a lively speech. When Masterji shudders to form a coalition government with the vile, but persuasive Arvind Singh (Shubrajyoti Bharat), it’s Tara who convinces him to take the leap. Soon, she’s winning polls and being tipped as the new CM. Mayawati’s reign was defined by the Bahujan movements in the north, but there were also scandals and corruptions under her charge.

The film loosely incorporates this by trying to paint a complicated picture of Tara. The firebrand leader is shown as ruthless and cunning — often unashamedly so. A scene where she threatens to transfer an officer who crosses her cuts especially close to the bone. Her Dalit identity shrinks from the story once she becomes CM — besides the temple entry sequence in the trailer, the film does not engage with caste politics further.

Since Oye Lucky! Lucky Oye (2008), Richa has been a consistently thrilling actor on the Indian screen. Of late, however, her bid for starring roles has come at a cost of script intensity. Both Shakeela and Madam Chief Minister are slight, superficial works. They lean into Richa’s plucky public persona, but don’t reward her with sufficient fodder. It makes you miss the old days, when even a peripheral Richa could electrify a whole film.