'Jagame Thandiram' review: Too frivolous to be serious, too serious to be fun

It’s like Karthik Subbaraj desired to make two different Tamil films set in the West. One, a solemn film like Iraivi that would bleed for immigrants and refugees and Eelam Tamils.

It’s like Karthik Subbaraj desired to make two different Tamil films set in the West. One, a solemn film like Iraivi that would bleed for immigrants and refugees and Eelam Tamils. It’s the sort of film that would declare that those that take to violence to protect the vulnerable mustn’t be labelled terrorists a plea, I imagine, in favour of the Eelam Tigers.

This first film would also take on weighty topics like racism, conservative politics, government bills and what it takes to pass them, unemployment… If this seems burdensome enough, Karthik, it seems, also wanted to make another film: A globe-trotting gangster film that would have our Madurai gangster clash with his equivalent from London, and explore this strange relationship and with it, the linguistic, culinary, cultural differences of their respective regions (Note how Suruli is taken aback when he sees an Indian kiss his girlfriend). Both stories seem like exciting possibilities in the hands of an accomplished filmmaker like Karthik Subbaraj.

With films like Iraivi and Mercury, he has established his credentials in executing a film with social themes. As for the second story, it’s pretty much his default zone. In his six-feature-film-old career so far, he has already shown his love for shooting violence in aesthetically pleasant ways. So, why does Jagame Thandhiram never really take off ? It’s because he’s tried to fuse these films together into one, and in doing so, has created a film in which one story doesn’t really allow the other to thrive. An attempt at wordplay concerning ‘thaamboolam’ and ‘thaampathyam’ failing to take off, is an early warning, and a harbinger of things to come. Jagame Thandhiram doesn’t ever thrive in its violence and humour as, say, a Jigarthanda did. Dhanush tries—especially with those malicious grins.

But the problem is, I couldn’t ever get a hang of his character, Suruli. You get fleeting details, like when his mother speaks of not being a good parent. However, the film leaves you with more questions than answers about him. Who is he really? What’s with his love for cooking? What’s with the murderous streak? What’s with all the ruthlessness and desire for money? And if he were really so ruthless, how is it that he’s so profoundly moved by a brief narration from Atilla (Aishwarya Lekshmi)—a throwback device from the 90s films in which filmmakers would have characters narrate their stories like in a play… This love story itself feels manipulative and flimsy. The film asks you to relate to the profound emotion felt by Atilla, but then, this relationship is never built on any profundity.

Suruli catches a glimpse of this woman and declares that he’s in love and would like marriage. Atilla, whose singing, it seems, is just for a single scene, randomly agrees to sit in a conversation with him. And before you know it, she’s supposedly developed feelings for him. I didn’t buy this important relationship for even a minute in this film—let alone be moved by the developments caused by it. Similar superficial exploration is offered to the Eelam conflict, mainly discussed through passing dialogues and brief introductions to mainly minor characters.

A major character is Sivadoss (Joju George), but then again, there isn’t really time in which to get introduced to him. We hear of him through an easy flashback narration, in which a political tragedy is archived into a single blast, in which the trauma and struggle of a homeless woman is relegated to some quick shots of her being moved about from country to country, before she settles in London. The flashback, in fact, has the effect of making you feel that her journey was not as uncomfortable as one might perhaps have imagined. This rather cold film needed to tell us more about its characters.

Who is Peter (James Cosmo), for instance? Apart from his generic, racist comments, what are his deep views about people of colour? What’s the extent of his influence in the government? While the English of the London characters in this film is thankfully quite all right, they still don’t seem to comfortably belong in the universe of this Tamil film. Something about their movement, their gestures, their dialogue delivery, their non-verbal responses… Jagame Thandhiram is an improvement in how integrated they are, but clearly, we still have a long way to go. 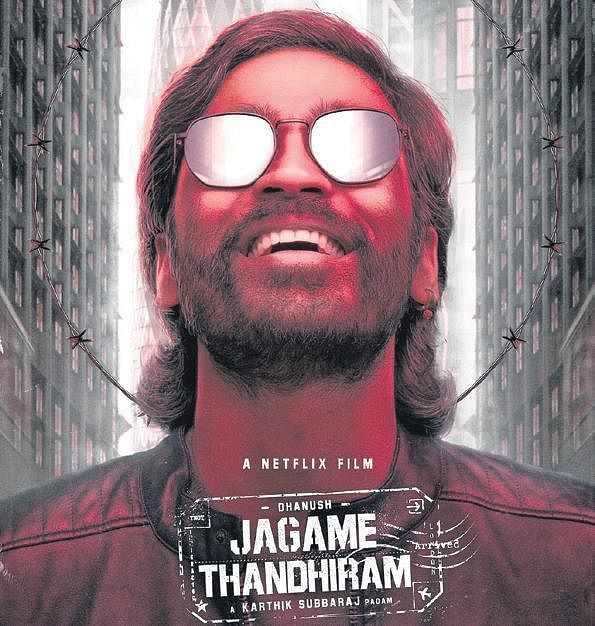 And yet, let me register that Karthik Subbaraj’s latest film means well. It demands that the world treat refugees better. It stands with Eelam Tamils; it empathises with those who take up arms on their behalf. It stands against racism, and I doubt there has been another Tamil film in which a character has used the word ‘xenophobia’. It even notes the irony of these Indians, so ill-treated in foreign countries, oppressing each other through caste divisions. It may be a ‘man’s film’ but it still makes an attempt to elevate Aishwarya Lekshmi’s character above the purpose of just being the romantic interest of Suruli—even if it isn’t exactly successful in achieving this.

The problem with Jagame Thandhiram isn’t the motive; it’s the execution. Among the pleasures of a Karthik Subbaraj film is the reuse of old Tamil songs to enterprising effect. Perhaps for the first time in his filmography, I didn’t particularly care for these homages in Jagame Thandhiram. You hear songs like ‘Kalyana maalai’, ‘Kadhalin deepam ondru’, ‘Veetukku veetukku vaasapadi venum’, ‘Oruvan Oruvan’, ‘Sambo, siva sambo’… and there are dialogues that speak of films like Nayagan and Citizen. But it all feels rather cursory—like he was checking off items in his auteur checklist. Homages. Check. Murder and mayhem. Check. Stylised gunfire. Check. And yet, for all the gunfire, this film feels like a misfire, despite Dhanush’s best attempts to light up this film.

His eyes drip menace and a certain insanity. And in many, many scenes, it’s impossible not to spot the Rajinikanth influences. He communicates this through lopsided grins and eyebrow raises and in dialogue-delivery too— like when a corner of his mouth moves and he utters, “Verum panam… vachikunga.” And yet, the film, confused as it seems between being a sensitive film about refugees and an entertainingly violent film about gangsters, does him no great service. In trying to be both, it ends up being neither. In a Jigarthanda, it didn’t matter that we didn’t feel emotionally connected to ‘Assault’ Sethu. But in a Jagame Thandhiram like in an Iraivi it’s important to care for the characters.

This film wants you to feel for the plight of the refugees and the Eelam Tamils. And in such a film, it’s a problem that I couldn’t get myself to truly care about any character. The body count increases, but it doesn’t matter. Suruli could have died, and it still would not have mattered. It doesn’t help that the characters in this film themselves don’t seem to be taking certain events too seriously. Close friends and aides get murdered, and yet, bizarrely, they seem quick to forgive. Be it Sivadoss (Joju George) or Deepan (Kalaiyarasan) or Dharani (Deepak Paramesh) or strangely, even Suruli himself, these characters move past betrayals quite quickly.

When these men don’t care about their tragedies as deeply, why must we? I’m convinced that Jagame Thandhiram is Karthik Subbaraj’s weakest film yet, but it’s still a Karthik Subbaraj film. And so, you do get treated to some lovely flourishes of filmmaking, aided by Santhosh Narayanan’s eclectic music. Watch a kidnapping scene get brilliantly executed in a series of quick shots of various characters speaking in one-liners. I also loved that big murder scene near the halfway mark and enjoyed how the camera circles the characters over and over again, as their reactions change. The event itself wasn’t a big surprise for me, but how it’s shot makes it all quite enjoyable, nevertheless. I may not remember Jagame Thandhiram for many things, but I won’t be forgetting in a hurry that the film still showed us the unlikely visual of a Tamil gangster going ballistic in an alien land being pounded by snow. And of James Cosmo being told how to eat parotta with salna.

An Ode to Heartbreak