There’s a scene in Woman in the Window that has accomplished actors, Gary Oldman and Amy Adams, facing each other, engaged in a bickering battle.

There’s a scene in Woman in the Window that has accomplished actors, Gary Oldman and Amy Adams, facing each other, engaged in a bickering battle. It’s a scene that ought to explode with tension, but all it evokes is amusement. Gary Oldman channels the melodramatic Sirius Black in him, while Amy Adams appears to be desperately trying to draw from a dry well of character description.

This one scene, overdramatic in treatment, hammy in performance, ungainly in execution, is a fitting microcosm of the mediocrity that infects this entire film, an adaptation of AJ Finn’s passable novel, Woman in the Window. Where the novel offers reasonable levels of genre pleasure, including all the red herrings and misdirection, the film, with its duration of an hour and forty minutes, simply seems to lack the patience needed to set up the environment in a way that does not seem manipulative. 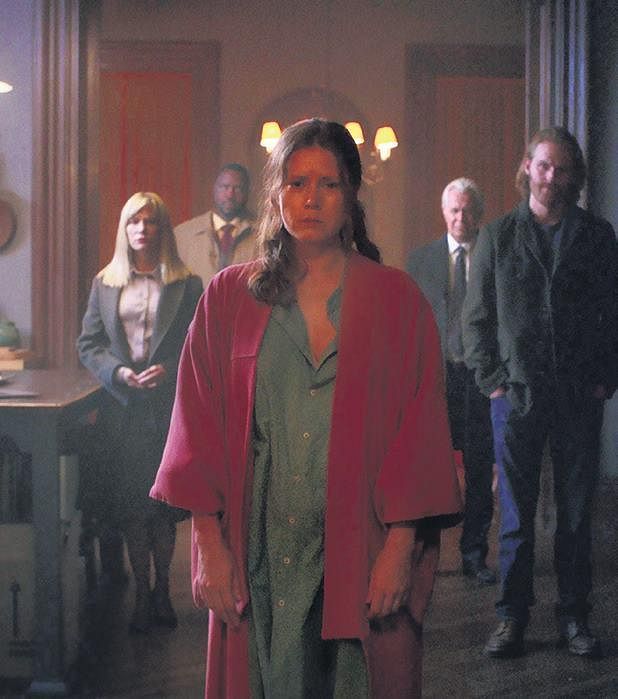 Where the novel delivers a fairly immersive experience of what it must feel like to be in the shoes of Anna Fox (Amy Adams), the lonely woman shut inside a decrepit townhouse, the film feels like it can’t wait to fling a series of mandatory character introduction snapshots, so it can move on. This has the effect of making you absorb all the developments from a distance—I suppose, like Anna does in her life.

Anna, we learn, is getting by on pills and wine, and furthermore, suffers from agoraphobia (an anxiety disorder that renders her unable to step out of her home). In the Covid-affected world we are prisoners of, it’s a condition that I dare say all of us can relate to. The difference, of course, is how she shares nothing of our desperation to get out. It’s a condition that is discussed in the book in detail, which helps paint quite an evocative picture of the distress Anna undergoes when she considers stepping out.

A quick shot in Woman in the Window establishes that even the simple decision of opening a door extracts a big toll out of her, but when she does get forced to step out in this film, her experience doesn’t feel as terrorizing as it should. The condition feels reduced to a gimmick, and frankly, this can be said of the plot twists in this film as well.

Anna is shown to show much interest in cinema (and as we know, when you are shut in, there is little else to do), and so, the film uses this to pay homage to some obvious influences. Rear Window’s James Stewart is referenced, for, Anna too, like him, uses her camera to zoom into the houses of her neighbours, who despite being aware of her proclivity for snooping, never seem to want to shut their drapes. And there’s, of course, the ubiquitous Unreliable Narrator™ trope that seems mandatory in thrillers that have a female protagonist. From classics like Rosemary’s Baby to the recent Girl on the Train, the women at the centre have had a hard time getting people to believe their truth.

However, where meaningful stories and powerful cinema succeed in creating emotional involvement with the protagonist, Woman in the Window feels like a cold dish served straight from the refrigerator. The ingredients are all there, as is the dish, but there’s no warmth, there’s no taste. Perhaps the film is aware of this, and perhaps that’s why it resorts to strange flourishes in style that seem to come out of nowhere, like the designer splashes of blood when a murder is spotted.

The film seems eager to convince you that it is not yet another mediocre thriller on Netflix. Amy Adams seems convinced it isn’t. The decision to rope in the who’s who of Hollywood talent, including Julianne Moore, Anthony Mackie and Jennifer Jason Leigh, seems born out of this conviction too. And yet, while the cast may be grade A, the quality of this thriller struggles to rise above B.