There’s a Carnival Today is Manjushree Thapa’s translation of the Nepali novel, Aaja Ramita Chha (1964) by the renowned Indra Bahadur Rai. Set in 1950’s Darjeeling, the novel takes us into the lives of a group of people in the 1940’s and 1950’s impacted by political forces beyond their control. We gain a glimpse into history at the level of daily life.

The story revolves around Janak, a Nepalese-Indian banker-turned-trader who marries Sita, a Nepalese. They move into a multi-family house. Janak is generous to his ailing neighbours and friends, but increasingly debt-ridden. 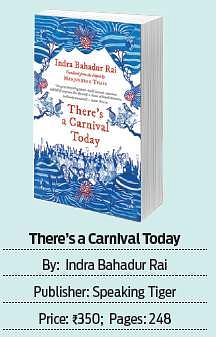 Disillusioned by his father’s infidelity, foster-son Ravi does not pursue his own love-interest; instead, he becomes involved in the labour movement and closer to Bhudev, his father’s political rival. Neighbour MK commits suicide, friend Yamuna ditches her husband, Bhudev goes to jail, Ravi is shot in the communist uprising and Janak faces arrest at the end of the book.

Whether alcoholic, promiscuous or cowardly, the people in this book are likeable because we come to know them through Rai’s tender storytelling. He does not over-explain. For example, when a peacock in Jogbani at the India-Nepal border crosses over to India, Janak drives it back to Nepal, calling India “the land of the Moghuls.”

How does Rai achieve reality and humanism? Readers of Nepali literature may know about Rai’s technique of “Leela Lekhan,” which means that there is no singular, objective truth; no judgments, only views.

Janak and Bhudev arrive at different truths and grow apart. Additionally, Rai’s narrative voice creates the realism. Sometimes he will pretend not to be the omniscient author; sometimes he will feign respect for the characters’ privacy, thus enhancing their reality.

While I do not know Nepalese, Thapa’s translation seems sensitive to the connotations and inflections of the source-text—as evident with such expressions as “caste and kind” or an irregular use of tense. I am not sure how to understand “Carnival” in the title—the title of the original Nepalese novel is Aaja Ramita Chha, which Thapa translates in an earlier column as There’s a Commotion Today.

There is a wry humour in depictions of the ways of the world, and even some hilarious segments at the outset, but as the plot progresses, we find less and less to smile about. Nor is the story carnivalesque.

Call it a balance, or a catharsis— but the novel transcends categorisation, and has a sense of wholeness, along with providing a revealing window into Nepalese life and literature. A five-star read.