The book is edited by JS Hawley and Vasudha Narayanan, both well-established academics in the US, and includes selected articles by other well-known scholars such as Diana Eck, Agehananda Bharti, and Sudhir Kakkar.

The focus is primarily on Hinduism ‘practices’, covering themes such as worship, lifecycle events, festivals, gurus etc. The title of the book could be misleading to some (deliberately?)—it is not about Hinduism with a comprehensive approach at any level, nor about the ‘life’ of a Hindu, historically or as at present. 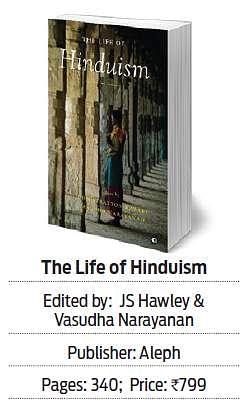 It is also not made clear whether it is a scholarly work meant for serious students of religious studies or theology or philosophy—or whether it is pitched for a layman leadership—or somewhere in between! The reviewer, who is a practicing Hindu in one of its million forms, is not surely competent to judge on the former approach—this is a review based on the assumption that the book is for the benefit of the layperson, desiring some knowledge on Hinduism.

Indeed the book’s discursive introduction shows little evidence of defining, at whatever level, what Hinduism is. It postulates the five ‘strands’ in the Life of Hinduism to include ‘doctrine, practice, society, bhakti’. There is next to nothing mentioned on ‘doctrine’ or ‘practice’ in its philosophical dimension.

A disconnected view of ‘Hindu’ society on the concept of yoga is delivered, where only ‘bhakti’ is recognised as relevant—other forms do not apparently exist! The approach in the book is neither ‘canonical’ nor ‘practice’. The stress is often on controversial contemporary quasi-political issues, (such as Godhra, ‘militant’ Hinduism), likely to be seen as adverse political commentary —not a scholarly presentation of the precepts, doctrines and practice of Hinduism.

‘Doctrine’ is covered cavalierly in a single short imprecise paragraph, oscillating between words as the ‘Vedas’, the ‘Brahmin’ caste, ‘polytheism v/s monotheism’, with the terms ‘Dharma’ and ‘Moksha’ thrown in casually with inaccurate definition. This is all the book has to say on the core of Hinduism.
The superficial surface manifestations include details of some of the rituals relating to say birth, marriage and death; or of the practice of ‘fasting’, lengthy discourse on topics such as ‘menstruation’; disjoined commentary on some random regional and sub-regional social practices. The reader does not benefit from any reference to their philosophical, historical, and religious moorings.

Can one refer to a personal eye-account of ‘Mardi Gras’ or ‘Halloween’ as the sole manifestation of Christianity in the US, or ‘Rio Festival’ as defining Catholicism in Latin America? Much the same can be said about the concept of ‘Guru’. The Radha Swami sect and the Sant Ravi Das sect have been referred to, without a comprehension of the role of a Guru within the Hindu system.

The collection of essays surely is not about Hinduism—there is little reference to the Vedas and Upanishads. Any book on Hinduism, which does not refer to the Gita, has to be seen with some skepticism; nor is a Shankara of the past millennium, or a more recent Ramakrishna or Ramana is even mentioned.

The book is also not about the lifestyle or the core beliefs of Hindus. The net effect is that Hinduism is projected as a ‘pagan’ practice, possibly inadvertently. No Hindu, or any Indian for that matter, is likely to get a new perspective or insight from this publication. The book may do injustice to any foreigner, who is interested in getting a first level knowledge of the outlines of Hinduism. Have some sympathy for the students of Barnard College and University of Florida—this book may be required reading for them!