A naive take on graft

This is a Kafkaesque process of police inquiries, bail appeals, lawyer conferences, and shifting goalposts

A rich man is staying at a hotel in Hyderabad. Late in the night, a local CID team arrests him for some small offence and prepares to haul him off to jail. The arresting officer mentions ‘in passing’ of how much she’s in debt and needs money. What happens next? 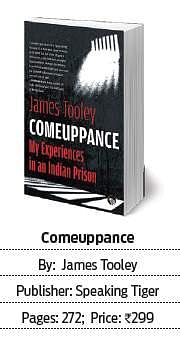 In this case, the rich man happens to be British—the school-system researcher and part-time businessman James Tooley—and he is unwilling to accept this raid as a pure shakedown for bribes. And so, the Kafkaesque process of police inquiries, bail appeals, lawyer conferences, and shifting goalposts begin. In other words, this is a walk through the Indian judicial system from the underside.

Tooley is sent to jail for a month, making the acquaintance of a surprisingly normal bunch of people and feeling the absolute powerlessness of the prisoner. He eventually gets bail and must struggle to get his confiscated passport back.
Spoiler: he eventually does, using his contacts.
On the face of it, this book is an indictment of the police and courts in India—how they prey on the weak and poor, how the inhumanely slow pace of the process makes undertrials rot in prison for years before they are even charged.

Once out of the jail, the routine of reporting to the CID office and to the court for multiple hearings grinds down all the accused, until they are willing to ‘settle’, above or below the table. All this is well known, even if under-reported.

A closer read, however, reveals multiple biases and subtle interpretations. Tooley continuously compares the state of the Indian system to the British one, drawing on references like the Magna Carta to illustrate what the law should be.

“We British are so fair, so honest,” he seems to say, “why can’t you poor people just be the same?”
For someone who’s worked with multiple developing countries around the world, he’s surprisingly naive about the prevalence of corruption and slow about using his contacts—if not money—to get himself out of his mess. Towards the end, he does wind up using these contacts, including the writer and economist Gurcharan Das, to get his case expedited.

To be fair, the problems that Tooley points out exist. His analysis is generally plausible if incomplete—too much power concentrated into the wrong hands, with an unclear set of laws to enforce.
The big piece missing in the explanation is the endemic poverty that made bribe-taking a socially legitimate way to rise up. For someone as socially aware and well connected as Tooley to first go through the experience with no understanding of it, and then to come up with only a partial explanation, seems unsatisfying. Worth a read, but should not be taken at face value.