Tackling glitches for a tech breakthrough

As a young boy, pictures of Karl Marx and Goddess Lakshmi, the deity of wealth, adorned his walls—pinned by his father and mother respectively, while he wanted a poster of ML Jaisimha, the stylish cricketer from Hyderabad. Satya Nadella, the only chief executive officer of Microsoft in its 40-year history, takes you on a journey of the company so far and peeps into the future, using the complexities of paradoxes of the two pictures on the wall of his room in his childhood.

‘Hit Refresh’ is a commonly used term, when the computing devices face performance glitch. A book written by Nadella with such a title is bound to arouse curiosity about the company with a brand value of $79.9 billion. The author does not fail to satiate the hunger to know more about what happens inside Microsoft’s office at Redmond in the US. 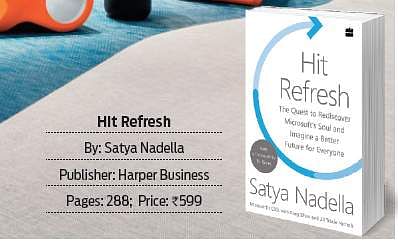 Nadella, does not write, but tells you the challenges young techies from India face in the US. The book is as much an insight into his early childhood, youth and formative years, as is the challenges faced by Microsoft during the last four decades.

“Without a doubt I wholeheartedly support programmes at Microsoft and in the industry that bring more women into technology and close the pay gap. I believe men and women should get equal pay for equal work.... During this time, I also found myself reflecting on the sacrifices my mother made for me and the challenging decision Anu (his wife) had made to leave a promising career as an architect to care for Zain (his son) and our daughters for more than two decades.... She made it possible for my career to advance.”
As CEO, the challenges and opportunities of mergers and acquisition like Nokia, LinkedIn or other small firms and the business arrangements with Yahoo and Apple are presented with the conundrum that a company and he as an individual experienced.

The author also depicts the new areas of opportunities in artificial intelligence and emotional intelligence for the company and methods being adopted to stay ahead of the curve.
Nadella dwells deeply into issues such as privacy, free speech, security, sovereignty and economic growth. As he attempts to justify the release on Xbox Video platform, satirical political movie, The Interview, on the North Korean leader Kim Jong-un, despite threat-like possibility of Microsoft’s data centre being hacked by North Koreans.

He also strongly defends and explains that automation does not mean job loss, but an opportunity to re-skill and become relevant.
Impact of technology in health, environment, education, economy, government welfare schemes and development of entrepreneurs across the world, is effortlessly synchronised in all the chapters. “Unfortunately, many governments have been resistant to embrace new technologies like the cloud... countries that invest in building technology skills as a per cent of GDP will see the rewards.... The world used to grow at four per cent per year, but it is now growing at roughly two per cent. So we need new technology breakthrough in order to have the type of growth we had.”

All the chapters are stitched with an underlying theme that reflects the title. Each topic in the book questions the author’s constant introspection, as he strives to find an answer on personal and professional front.

“Why do I exist?” “Why does our Institution exist?” “What is the role of a multinational corporation in our world?” “What is the role of a leader in digital technology, especially as the world turns to tech as such a crucial input to drive growth?”
It is a book for anyone who wants an insight into the mind of a CEO operating a multinational corporation, with value systems based on karma.