The colossus of Tamil Nadu

MGR is presented not just as an artiste, or a politician, but a human being

The brothers (MG Ramachandran and Chakrapani) met Sathi Leelavati’s producer Marudachalam Chettiar and Kandasamy Mudalier at a hotel on Wall Tax Road. When Marudachalam Chettiar held out a `100 note as advance, the brothers were overwhelmed. As they walked home, MGR asked his brother if the note was authentic. Back home, (mother) Sathyabala held the note against the light, and declared it contained a watermark.

At that time, if somebody had told MGR that, one day, he would become an extremely wealthy man, a superstar of Tamil cinema, a man much loved by the masses, the founder of his own political party, be a three-term chief minister of Tamil Nadu, and have an affair with a protege who would become a chief minister herself, he would have said, “Don’t be daft.” But that is what happened. And this is explored in lucid and absorbing detail in the well-researched biography. Apart from MGR’s life, the book also focuses on the 60 years of the Dravidian movement.

But what fascinates is MGR. How a Class III dropout made his way in the world; his complicated relationship with Prime Ministers Morarji Desai and Indira Gandhi; and his friendship and later antagonism of Chief Minister M Karunanidhi.

Asked about their relationship, Kannan says, “MGR had a huge amount of respect for Karunanidhi. The 25-year-long association, when they were colleagues in the film world, and the Dravida Munnetra Kazhagam, could not be set aside. So, whenever they met, in the Assembly and outside, there was a good deal of cordiality between the two.” What is also interesting is MGR’s relationship with Jayalalithaa, 30 years his junior. 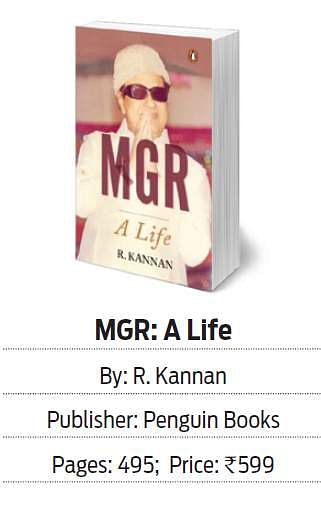 “She sort of stunned him, with her fair-skinned beauty, English language skills and phenomenal memory,” says Kannan. “The fact that initially she was indifferent, dazzled him.” Afterward, when MGR realised that she was very ambitious, the relationship became ambivalent. “However, when he was about to throw her out of the party (the All India Anna Dravida Munnetra Kazhagam), his fondness for her prevented that.”

“MGR did things by instinct. He was a large-hearted man, who believed in giving. He was quirky at times. He wanted to know about what was happening with others. So his intelligence set-up was very active,” says Kannan. Says legendary actor Kamal Haasan: “This is an interesting read and told in a voice similar to MGR’s.”