Between darkness and luminance

The book is about a blind man’s relentless pursuit of the truth behind his father’s suicide and the mystery behind his wife’s disappearance.

Flitting between darkness and light, and a plethora of emotions, The Unseeing Idol of Light by K R Meera is a haunting tale of Prakash who is grappling with the trauma of his wife, Deepti’s disappearance. Chasing yet another lead, he has reached a homeless shelter to identify her. Outside the building his sightless eyes follow the gaze of a mango tree that is almost always a grim association with his father’s suicide.

During their brief years of togetherness, Deepti remained a luminous presence in his life mellowing down the memory of his father’s suicide. With the light gone, Prakash turns blind in both the eyes and is once again obsessed by the thought of his father’s death. 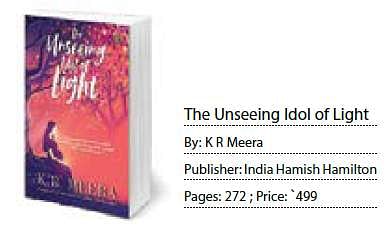 “When he became certain that the reason behind Deepti’s disappearance would remain an unfathomable mystery, he found himself seriously pondering about the cause behind his own father’s vanishing act. He felt sure of a discernible connection in the inexplicable circumstances behind the sudden departure of the two people who had given meaning to his life.”

A chance encounter with a letter in his father’s library puts him in touch with Abha Ma, a colleague and friend of his father, and he begins a correspondence with her. Along with the unrelenting quest for his lost wife, he also becomes close to Rajani, a woman with a tormented past.

A passionate affair follows but Rajani can sense that she cannot have it all—the “luminescence” of Deepti being a lingering presence. Shyam, his childhood friend, is a witness to it all and accompanies Prakash everywhere—in search of Deepti and his visits to Rajani.

With these two characters, Meera’s narrative exhibits a complex but a clever interplay of light and darkness. While Prakash steps into the world of sightlessness, Shyam is the eyes through which he trudges the real world. Yet, Shyam is also the shadow just as Prakash functions through his mind’s eyes—when attempting to identify Deepti at the shelter or picking out books for patrons at the library he works.
Abha Ma’s last letter helps put the ghost of his father’s death behind him. What about Deepti’s mystery? What of the two women? The one he cannot find and the one he cannot have? The one who has disappeared and the one who left disillusioned. Elsewhere, the two (women) have had a brief interlude or so the author might like us to believe.

In this tale of a blind man’s relentless pursuit, one cannot ignore the presence of (blind) bats as metaphor for sights, sounds and emotions. Prakash describes his father’s body hanging from the branch of the tree “like a bat”. And soon after Deepti’s disappearance, his life hangs itself “upside down blindly like a bat”. Instances such as these also make it hard to believe that it is translation from Malayalam. The efforts of Ministhy S in keeping the voice intact do not go unnoticed. Needless to say, the book becomes at once heart-warming and heart-rending.

More from Books.
Now we are on Telegram too. Follow us for updates
TAGS
K R Meera unseeing idol of light