As the daughter of Sahitya Akademi Award winner poet Pratibha Satpathy and literary critic Nityananda Satpathy, Paramita says she was fortunate to have been raised in an atmosphere of literature.

The 14 short stories in the collection cover themes such as love and lovelessness, longing for companionship, nostalgia, guilt, betrayal, exploitation of the marginal, concern for the environment, unusual bonding between human and animal, and pining for a lost sibling

Colours of Loneliness and other Stories, a collection of 14 short stories by Sahitya Academy Award-winning modern fiction writer in Odia, Paramita Satpathy, was recently launched by eminent poet and critic K Satchidanandan in New Delhi. The book happened when Snehaprava Das, an avid translator of experience, suggested making one in English. Paramita says that being a writer of Odia, she is always eager to reach out to more readers beyond the geographical boundaries. “I have friends from the literary world and colleagues who also express their desire to read my work. So, translation is the only way to make it possible,” she says. Needless to say, she happily agreed to Das’ proposal.

The stories chosen by Das for this volume—of almost one hundred stories that the author has penned—spread across a long period of time. While one was written as early as in 1996, the most recent one was authored in 2012. With an undercurrent of isolation flowing through almost all the stories, Paramita explains that the stories in the collection assembled, mostly the choice of the translator, vary in themes, in structure, in the manner in which they are expressed and the language used to express them. “There are stories of love and lovelessness, longing for companionship, nostalgia, guilt, betrayal, exploitation of the marginal, concern for the environment, unusual bonding between human and animal, pining for a lost sibling—almost all kinds of human emotions, realisations and experiences,” says Satpathy. 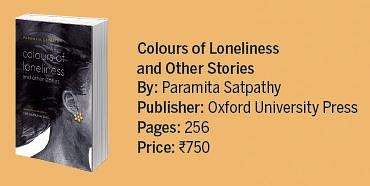 Further, the book’s stories are based on the strength and resilience of women, and address a number of social issues. ‘The Unborn Daughter’s Story’ talks about concern for the plight of girl children in the world; ‘Wild Jasmine’ depicts the courage and resilience of an innocent girl when she finds her clan face the pain of displacement from their place of living; ‘Ultimate Pay-Off’ is a heartrending account of brutalisation for the demand of dowry; ‘Jungle Lore’ makes a case against the merciless killing of animals; and ‘Elixir of Love’ is a narration of the quest for love in a world of betrayal. In the title story, ‘Colours of Loneliness’, the protagonist Maya is left alone when she develops leucoderma. Treated almost as an untouchable by society, she is, however, not destined to lead a life of seclusion as much as her friend Veena is.

As the daughter of Sahitya Akademi Award winner poet Pratibha Satpathy and literary critic Nityananda Satpathy, Paramita says she was fortunate to have been raised in an atmosphere of literature. “Having witnessed the bonding my parents had with books, I developed a keen interest in reading from an early age,” she says. She elaborates that the works of world-class writers such as Alice Munroe, Doris Lessing, Tony Morison, Amrita Pritam, Ismat Chughtai, Mahasweta Devi, Sara Joseph and others shaped her feminine sensibilities. It was no surprise then that writing came to her naturally. “Fascination towards my mother’s work and getting an opportunity to read good books of literature have contributed to shape my world of imagination,” she adds. In fact, her mother was the first reader of her stories for a long time.

In a career spanning three decades, she has carved out a niche for herself with seven short story collections and three novels to her credit. Several of her works have been translated in Hindi and English. Recently, another of her novels was published, which is based on the last part of the freedom struggle in Odisha. “It depicts Gandhian philosophy, human values and the nastiness prevalent in society,” says Paramita. Currently, she is also writing a fiction series that compares the lives of important women characters in mythology with that of modern women who are plunged into similar life situations.

Talking about how modern Odia fiction is different from fiction of other regional languages, Paramita believes that literature per se cannot be different because of a region’s geography, since human experiences, at least in India, are almost the same. “We do not differ much on culture and behaviour. It depends on how evolved the literature of a language is, how the readership is, how it reacts and rejoices at the literary works of their languages,” she explains. For this reason, Paramita believes that the writer and his or her power of imagination are far more coveted than the language in which one writes.