‘Loves and lives of the upper crust of Bombay society’

Shunali Khullar Shroff’s Love in the Time of Affluenza is all about the rich and the fabulous who form Mumbai’s one percent elite.

Shunali Khullar Shroff’s Love in the Time of Affluenza is all about the rich and the fabulous who form Mumbai’s one per cent elite. “I happen to be exposed to this minute fraction of the city’s population. I am familiar with this world they inhabit and so it was easy for me to place my story in it,” says the second-time author, who previously penned the Battle Hymn of a Bewildered Mother.

A deceptively easy read, this “satirical take on the loves and the lives of the upper crust of Bombay society”, as Shunali puts it, touches upon infidelity, what it means to be equal partners in a marriage and how privilege doesn’t shield a woman from the expectations of a deeply patriarchal society. 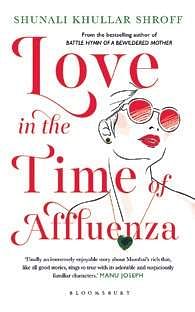 The funny play on a Marquez work in the title sets the tone for the entire novel. How did that come about?
Some people have asked me if my book is inspired by Love in the Time of Cholera, but no, it isn’t even a distant cousin of Marquez’s masterpiece.

I do look at affluenza as an incurable affliction. I was writing about the wealthy class and somehow the rich don’t catch cholera whereas affluenza seems to have established itself as a chronically congenital condition, especially over the past two decades.

In the new India, catching affluenza is a prerequisite qualification to gaining entry into the cool rich club.

Love and its transient nature is a lot of what my book explores, and this includes self-love as well. So I plucked the courage to borrow from the title and replaced Cholera with Affluenza.

There is a fine balance in the narrative between humorous asides and the harsh reality of the problems faced by women in a patriarchal society.
Privilege isn't privilege enough if it comes along with suppression of every other desire, of taking away your autonomy as a woman or compelling yourself to subsume yourself in housewifery without a voice.

It didn’t need to be a conscious effort. It is a well-understood fact that a good way to make people take you seriously is to make them laugh first. That’s also me!

The humorous asides are just my way of looking at life even while grappling with serious subjects, and as it turns out that is exactly how my commissioning editor Faiza Sultan Khan of Bloomsbury herself is. So it all worked out very organically.

There’s a point where you talk of sensitising children and how important it is to talk about homosexuality as a parent.

When my older daughter was about 9 or 10 years old, she talked about boys in her class calling another boy gay just because that kid chose books over football. That is when I realised it was important to sensitise her.

My kids and I talk about LGBTQ at home.  The onus is on us parents to raise children to be more inclusive without biases based on sexual orientation, caste, class or religion.
Bloomsbury India, Rs 299.

Now we are on Telegram too. Follow us for updates
TAGS
Shunali Khullar Shroff Love in the Time of Affluenza