Of healing and forgiveness

Atish—the Lord of the Slums—takes a journey through the world of migrant labour. A powerful combination of power and crime thrives on the hard work of the less fortunate.

Passions spin the plot and we are betrayed by what is false within us!’ These words from the work of poet George Meredith (1828-1929) echoed in my mind as I read Destiny’s Flowers by Kajoli Khanna, who explores human error, healing and forgiveness in the lives of Mila, Pema and Atish. We see them becoming intertwined and entangled as it takes the reader to the magnificence of a remote fort and into the squalid animated slums of TaazaBasti; from the environs of a posh Delhi apartment to the tranquil settings of simple monasteries with glorious shrines and then on to an old sprawling bungalow in Bengal. 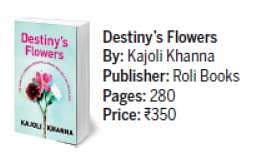 Each of the three protagonists in this tale are seekers: Mila looks for recovery to reinvent herself; Pema takes on the persona of a Buddhist nun attempting to conceal a past that refuses to fade away and spins a gossamer web as she struggles to come to terms with the leaden weight of her murky past. Atish springs from the slum lives out-of-the-box but fails to hold on to good fortune even as She smiles on him. There can be no escape, no reprieve and no acquittal from the karma of his own cowardly acts. When their paths cross, the trio must come face to face with a whole gamut of emotions, ranging from human frailty, courage, giving and taking, grace and bumbling foolishness.

The first character we meet is Mila—an art restorer in the Fort of Jogi—wanting to revive priceless artworks, but is brutally assaulted. In its wake comes paranoia and depression that puts the brakes on her life. Trying to reconcile the pulls and pushes of love, she ends up a spiritual detective. Is meditative reflection the answer? For try as she will, the mind refuses to be cowed under.

Pema’s story reminds me how even while you are running way from the world, you cannot run away from yourself. Turning a Buddhist nun is of little help in chasing the demons of the mind. It’s a story as old as Time that running way from the past is no solution. The only way forward is to accept, reflect and move on.

Atish—the Lord of the Slums—takes a journey through the world of migrant labour. A powerful combination of power and crime thrives on the hard work of the less fortunate. As each character goes through ups and downs, I hear the poet Meredith murmur in my ears: ‘Didn’t I tell you, old man?’ he says, adding: ‘Passions spin the plot and we are betrayed by what is false within us.’