Nadia Marks’ Between the Orange Groves is about a land of romantic old harbours, windswept lonesome beaches and splendid old ruins.

Reading Nadia Marks’ Between the Orange Groves is to take a trip to the magical island of Cyprus in the eastern Mediterranean Sea, which has always been known for its minerals, superb wine, cheese and natural beauty. It’s a land of romantic old harbours, windswept lonesome beaches and splendid old ruins. Historically, the British ruled the island for over 82 years, up until the time people had had enough of colonial rule and rose in revolt against their occupiers in the 1950s.

Of course, the English did not see it the same way. Instead, they did what came naturally to them all over the Empire: trying to wrest some sort of control on the runaway cart. They hit back, turning Turks against Greeks and vice versa. The fall-out, in turn, affected many a Greek family who were on friendly terms with the Turks.

Especially among the older generation, you would have found some hostility between the two communities, but generally, folks did not let it get in the way of their friendship. Up until the time Anastasia does the unthinkable by eloping with Evner, a man of the other faith. The resultant war threatens to sink everybody—‘After my sister eloped, the whole family went into a kind of mourning!’ Into the eye of the storm are flung love and friendship. This tale of desire, burning secrets and forbidden love tells a touching story, that spanning history, family drama, with characters etched against the mesmerising blue skies. This is a page-turner that is hard to put down once you’re hooked.

In a small village, set among the wild mountains, two families of different faiths share a seemingly unbreakable friendship based on mutual respect and deep affection. Mothers and daughters share their daily secrets, fathers and sons support each other as they live their lives between the pine trees and orange groves. It’s here that two boys grow up together, as close as brothers. Their lives are inextricably linked, but as their fortunes shift and time passes, an unforgivable act of betrayal takes place, setting in motion a chain of events that tears the two friends and their families apart. 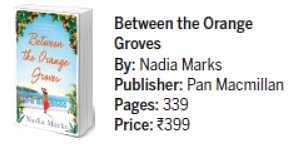 Many decades later an old man living in London decides to share his painful memories with his daughter; transporting her back to an island brimming with passion and at its heart a scandal that still haunts those involved. Is it too late for forgiveness? Or can the next generation embark on a journey of their own to help mend the damage done all those years ago? Who knows? I, for one, am not going to reveal it.

Now we are on Telegram too. Follow us for updates
TAGS
Between the Orange Groves Nadia Marks Mediterranean Sea