All the single ladies...

In a tête-à-tête, journalist Kalpana Sharma discusses the anthology of short stories by 12 exceptional single women that she compiled into Single by Choice

Delhi-based publication house Women Unlimited (WU) – a feminist press in the country that publishes new perspectives, has brought out an anthology, titled Single by Choice. Journalist Kalpana Sharma, who edited the book says she was approached by Ritu Menon who runs WU to put together this anthology. Sharma also felt this was an appropriate time to broach the subject after having come across an increasing number of urban professional women who were either deferring marriage or choosing to remain single.

Could you talk about the top accounts in the book that captivated your attention?

Actually, each one of the 12 contributors is exceptional women in their own way. Their essays are honest and thoughtful. Their willingness to share something about their lives which is such a personal decision is what makes each of them diverse and really interesting. But if there is one that is different from the others for many reasons, it is the essay by Bama, the Tamil writer. She reminds us how the additional factor of caste plays out in the lives of the women who choose to remain unmarried.

Many narratives in the book point at the cost a woman has to pay for her decision to remain single. Is there a way women could avoid these?

Given the nature of our society where getting married is the norm, women who choose otherwise will always stand out. They will inevitably be the subject of speculation and much greater scrutiny than most women face. So we just have to learn to develop a thick skin and get on with our lives!

Could you talk about the deep-seated belief in the society that only marriage makes a woman really happy and safe?

This fallacious belief is premised on the concept that women are somehow lesser beings. That only a man, and marriage, and of course, children can make them happy! So does this mean all married women are ecstatically happy? And that those who choose not to get married are ‘incomplete’ and permanently depressed? Obviously, this is an absurd conclusion. Happiness has nothing to do with marital status. Women are miserable being married and women are ‘really happy’ being single. This ‘deep-seated belief’, as you call it, has to change for the sake of all women in India, married or unmarried, before they can find some happiness in their lives. 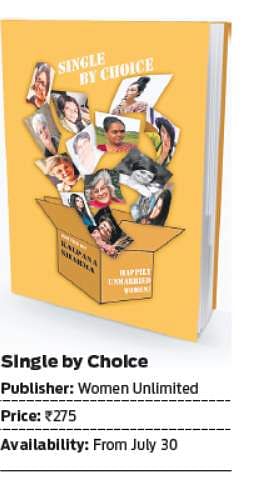 Why are many women nowadays consciously deciding against a matrimonial alliance?

I would say it is because more women are becoming economically independent and are finding satisfaction in their careers.
They can see for themselves that the dominant norms that govern Indian marriages remain deeply patriarchal and unequal so far as the woman is concerned.
So why would women who are leading a full life, with friends, family and a satisfying career, consciously give all that up to enter an institution where they are not accepted as equals?

Now we are on Telegram too. Follow us for updates
TAGS
Women Unlimited Journalist Kalpana Sharma Ritu Menon single by choice