Experiencing the Bard in India

The author draws examples from scores of films and other Indian storytelling formats.

Every life attains a sense of grandeur if one claims it as their own and when it comes Jonathan Gil Harris, former associate editor of the Shakespeare Quarterly and one of the world’s foremost experts on the Bard, it attains a completely new sense. Born in New Zealand, educated in England, Gil Harris, who resided in the US for over two decades before moving to India and teaching English at the Ashoka University, got to experience how Shakespeare back in the day was considered to be the ‘quintessential masala’ entertainment instead of the high art status that adorns it today in a whole new way by living in India. Masala Shakespeare: How a Firangi Writer Became Indian is a celebration of the author’s exploration of Indian cultural forms that resonate with Shakespeare’s craft and how a gora author found himself at home in India. ​

Masala Shakespeare has Gil Harris focusing on 12 Shakespeare plays that have come to resonate with India in a fashion that is both independent of the English original as well as unique in its own way. Gil Harris examines films inspired by the Bard such as Angoor, Maqbool, Haider, Omkara, The Last Lear, Ishaqazaade, Goliyon Ki Rasleela Ram Leela, Dil Bole Hadipaa! and 10ml Love and others to show how they all singularly revolt against the traditional purity of the original. 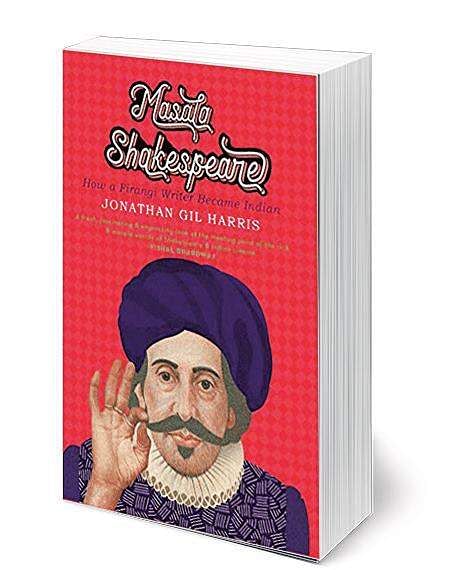 The author draws examples from scores of films and other Indian storytelling formats. He notices how their Shakespearean interpretation reveals much about the people. The ‘anti-Romeo’ squads of the Uttar Pradesh police that were set up to address the rampant ‘eve-teasing’ by the Yogi Adityanath government makes the author question the chief minister’s understanding of Shakespeare, and seeing Gulzar’s Angoor makes him ponder if the film, which is based on Comedy of Errors was, in its own way, a prequel and a sequel to Gulzar’s later stories on the Partition. ​

Reading Gil Harris’ account of how he falls in love with India, thanks to seeing Shakespeare in all things masala (read exotic), is a strange trip, to say the least. He affirms that one man’s rubbish, is another’s masala and therein, lies the thrust of the book. On the one hand, Gil Harris’ odyssey—no other word can even come close to encapsulating how he feels about finding himself in India—is fascinating as it conjures up images of popular Bollywood films, works of art, poetry of the Oscar-winning lyricist Gulzar and what-have-you to juxtapose the Bard, and therefore by extension, Gil Harris himself. While on the other hand, it reminds you of the old Hindi adage, ‘sawaan ke andhe ko hara hi dikhta hai’ or everything looks yellow to the jaundiced eye.

For some reason, Gil Harris evokes the Bard in nearly everything that meets his eye in India. The narrative is also as much about this ‘masala’ concoction being a portrait of contemporary India with its contradictions et al as it is about Gil Harris and his journey of being the outsider-insider.

Early on in the book, while talking about ‘masala’ Gil Harris describes eating a golgappa for the first time. Reading Masala Shakespeare is akin to the unacquainted experiencing a golgappa—the palate doesn’t know how to react or like Gil Harris puts it, ‘couldn’t reconcile the pleasure of tamarind with the recoil induced by the double whammy of sour mind and hot chilli’. Later, the exercise seems regular, something to indulge in once in a while or depending on how you see life, even pointless.