'When a Malayali took on the British Raj', write authors Raghu and Pushpa Palat

The book, The Case that Shook the Empire: One Man’s Fight for the Truth about the Jallianwala Bagh Massacre, is crisp and well-written, managing to avoid a bland recitation of facts and dates.

Authors Raghu and Pushpa Palat were walking around the Jallianwala Bagh Museum in Amritsar in December 2017, when suddenly Pushpa pulled up short and said, “Look at this plaque. Your great-grandfather is being honoured.” Raghu stared at the words written in praise of Sir Chettur Sankaran Nair, and thought, “Here was a man from Kerala, being honoured on the other side of India, in Punjab. People did not know about him even in the South. Even I don’t know much about him.”

Not surprisingly, a need arose in him, to know more about his ancestor. He also wanted to tell the story so that his daughters Nikhila and Divya (Bollywood actor) and granddaughter Nivaya should know the family history.

And the research began. The more Raghu read, the more fascinated he became and he asked his wife to join him on the journey to trace the family history. “Both of us are writers,” says Raghu. “I have published 46 books in genres such as management, shares, banking, investments and business communication, whereas my wife writes on luxury and lifestyle. We were both entering a new genre and we felt it would be better if we combined our different skills.”

The end result has just been published. Intriguingly titled The Case that Shook the Empire: One Man’s Fight for the Truth about the Jallianwala Bagh Massacre.

Nair (1857-1934) was the President of the Indian National Congress, Advocate-General of the Madras Presidency, and a member of the Viceroy’s Executive Council. “Being a member of the Council was a pinnacle for an Indian,” says Raghu. But when details of the Jallianwala Bagh massacre, which took place on April 13, 1919, began to seep out, Nair had no hesitation in resigning in protest. This created ripples among the British establishment. 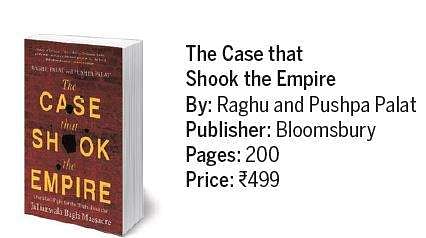 Later, Nair wrote a book called Gandhi and Anarchy, where he held the Punjab Governor—Michael O’Dwyer—responsible for the massacre ordered by Acting Brigadier-General Reginald Dyer at Jallianwala. Officially, 379 unarmed civilians, including men, women and children, were killed. But unofficially, the figure is around 3,000 wounded and killed.

When O’Dwyer read the book, he asked Nair to publicly withdraw the book from circulation and apologise along with paying £1,000 to charities specified by the Britisher. Expectedly,Nair refused. Consequently, O’Dwyer filed a case for defamation in the Court of the King’s Bench in England in 1922.

However, it was not an even playing field. As the authors write, “There were innumerable disadvantages for Nair, not least of which was a less-than-proficient legal practitioner. The trial was to be held in England, the jury would be English… most significant of all was the fact that the English continued to believe themselves to be far superior to Indians, which is why the latter were rarely treated fairly.”

English juries had acquitted Englishmen who had killed Indians (one was acquitted after killing a coolie and another after killing a washerman who had asked for his wages) and here was an Indian accusing an Englishman of atrocities in an English court. It was destined to be a case that made history. “Later, it gave a tremendous fillip to the freedom movement,” says Pushpa.

In a chapter titled ‘The Jallianwala Bagh Massacre’, here is what Lala Giridhari Lal, an eyewitness who watched the shooting from a house overlooking the Bagh, said, “I saw hundreds of persons killed on the spot. Even those who lay flat on the ground were killed... The dead bodies were of grown-up people and young boys. Some had their heads cut open, others had eyes shot, and nose, chest, arms or legs shattered... I think there must have been over 1,000 dead bodies in the garden. Many had to leave their dead and wounded behind because they were afraid of being fired upon.”

The book is crisp and well-written, managing to avoid a bland recitation of facts and dates. “We wanted it to be a historical novel, as we wanted to reach a larger audience,” says Pushpa. And to a large extent, they have succeeded.

Now we are on Telegram too. Follow us for updates
TAGS
The Case that Shook the Empire British Raj Jallianwala Bagh Massacre