Reel India manages to get everything as nattily as a dish inspired by the confluence of many cultures such as Bunny chow, but the prose appears burdened by a sense of near defensiveness.

Anyone who has grown up on a staple diet of Hindi films through the 1970s and the 1980s knows the difference between the real and the reel and is also aware that never the twain shall meet. Much has changed since that generation grew up and as it happens, the two have met. Namrata Joshi’s Reel India: Cinema off the Beaten Track tries to capture the meeting of these two worlds by journeying through the interiors of the country intimately chronicling little known accounts of India’s obsession with the movies.

The former film critic of Outlook and now The Hindu, Joshi has for long covered films to witness the transition where the distance between the viewer and the screen has drastically reduced in more ways than one. The book is filled with many fascinating real-life stories that give the reader a sense of India’s immersion in movies and brings to light the elements that make cinema an organic part of our existence. 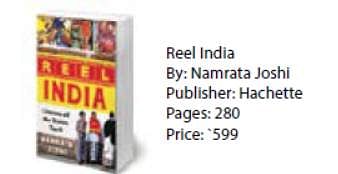 Many of the stories and observations might not be new in spirit to those who have followed Joshi’s work. The tales a Shah Rukh Khan fan from Lucknow living in his own world, the charm of the makeshift cinema halls, the intense rivalry in regional films, the existence of bizarre parallel film industry in places off the beaten track such as Malegaon, and the significance of cities such as Madurai and Lucknow both in front and behind the camera is the kind of reportage Joshi brought to life even when she was busy critiquing the standard fare. The author’s innate emotional bond with cinema and what it means to lives of not just the usual suspects such as the Khans or the Karan Johars but also scores of up and coming filmmakers or aficionados across India continues to make her writing stand out. Seen in that light, to have such tales woven into one volume by Joshi makes Reel India a great idea. While the book does give the reader much to enjoy, the conspicuous absence of a fulcrum in terms of the overarching theme makes it a bit of a letdown.

For the past few decades, critics and commentators have in some way or the other nurtured how the general audiences react to films. Reading Reel India, you get a sense of what the so-called small town viewer thinks and what makes them unique. It’s intriguing to have Joshi as the narrator of this journey as she is one of the few who are equally home on both sides. There is a great celebration of what is in plain sight—the one experience of cinema uniting India, which clearly is a grand idea that binds it all, and it’s ideal for readers who are just discovering the exotic offering called Bollywood. For a better part, Reel India manages to get everything as nattily as a dish inspired by the confluence of many cultures such as Bunny chow, but the prose appears burdened by a sense of near defensiveness.

Reel India would have been a better testimony to the triumph of the ‘real’ India that the ‘reel’ version often misses had it not employed an idolatory tenor.