'Hunted by the Sky': Star-spangled Saga

Author Tanaz Bhathena said that this fantasy novel about the fictious world of Ambar borrows from the Vedic and medieval times.

Tanaz Bhathena's Hunted by the Sky is a fantasy saga set in a mythical kingdom. The narrator is Gul, a girl with a star-spangled tattoo on her body, who is destined to possess magical powers that will enable the death of the evil King Lohar, the ruler of Ambar.

This basic premise forms the fulcrum of this magical folktale, which is inspired by Vedic and medieval India. "I used research from both the Vedic and medieval periods while writing the book. I read Kautilya’s Arthashastra, Abul Fazl Mubarak’s Ayeen Akbary, and also a lot of historical non-fiction by authors like Ruby Lal, Abraham Eraly and William Dalrymple.

I further looked up a lot of museum archives online to research food, weapons, clothing and jewellery from 15th and 16th century India,” reveals Tanaz whose Insta bio stands out for this line: I write on fierce girls.Is this why her books have been women-centric? How does she define fierce? “Nothing particularly deliberate on my part; I just enjoy writing strong women characters and their stories. Determination shapes ferocity. And all my women protagonists are very determined,” she states.

So, it comes as no surprise that Hunted by the Sky is also peopled with feisty women characters such as Juhi, Ambar and Kali who have overcome personal tragedies to unite for a cause. There is a deliciously wicked lady villain, Major Shayla—mean-spirited but spunky enough to strike in the hearts of men. The author was inspired by powerful women—both historical and modern to write this story.

"Indian women have always been powerful and complex figures. Unfortunately, recorded history tends to be male-centric and focused on the achievements of male rulers. If you need an example of a powerful woman from ancient India, look up Prabhavati Gupta (from the third century CE). If you need examples from medieval India, look up Chand Bibi and Nur Jehan," explains Tanaz.

The setting of the book is obviously Indian, peppered with a lot of colloquial terms used to identify traditions, objects and even weapons. How much of an inspiration were the medieval courts? "Partially. But, let me make it clear, that the fantasy world from Hunted by the Sky is not exactly medieval India. The kingdom of Ambar has its own history, culture, and even language, which borrows from Persian, Hindi, and Sanskrit," she says.

The novel has a very desi Harry Potter-kind of vibe, where the language is just as compelling and the visual imagery simply enchanting. Magic is a predominant theme. So, does she herself believe in the metaphorical powers of magic to transform lives? "The magic that’s described in the book is more of an innate natural ability—and while it’s powerful, it comes at a cost to everyone who uses it. There is no easy solution to anything in the real world—and it was important to me that my fantasy world reflected this as well," says Tanaz.

This two-time nominee of the White Pine Award by the Ontario Library Association, was born in Mumbai and raised in Riyadh, Jeddah and Toronto. Much acclaimed for all her books, what do accolades mean to her? "Awards always come as a pleasant surprise to me. While it feels good to be recognised for my hard work, my greatest joy comes from readers who enjoy my books and recommend them to their friends,” she says, adding, "I’m also used to critical feedback from readers. It’s a part of the business and also very subjective. If I can improve from the feedback, I make use of it and try to apply the advice to future books." 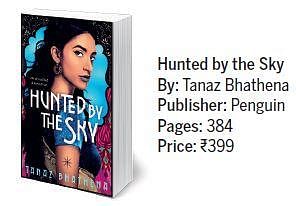 Now we are on Telegram too. Follow us for updates
TAGS
Tanaz Bhathena Hunted by the Sky