'Cricket Drona' review: Discovery of a peerless tutor, through the eyes of his pupils

If you are not a cricket fan or have not heard of him, there is a chance that you will not like this book. The form itself is unusual. Through the chapters, different persons talk about the same man. And, it is not as if what they say varies vastly from each other. That way, it is possible that one may find this repetitive.

Hang on. If you like cricket, have heard of Vasoo Paranjape, but don’t know much about him, Cricket Drona might just be what you need. Several Indians who follow cricket know he is a reputed coach. Not more than that. This book put together by Vasoo’s son Jatin — a former ODI batsman who also served as a national selector — and award-winning journalist Anand Vasu reveals how many careers he influenced, as a tutor, friend, father figure, mentor, teammate, observer and advisor. At times, some or all of these packed into one. It is a worthy discovery how Paranjape touched so many lives and changed some of those.
Paranjape never played for India or didn’t have a flattering first-class record for Mumbai. Yet, figures like Sunil Gavaskar, Dilip Vengsarkar, Sachin Tendulkar, Anil Kumble, Rahul Dravid, Yuvraj Singh, Rohit Sharma — to name just a few — saw something or so many things during their interactions with him that it prompted them to contribute short essays for this book. Gavaskar made his international debut in 1971, Rohit in 2007. Players from completely different eras, who excelled in different formats, finding Paranjape's company and inputs beneficial suggests he is special. This is the point explored in this compilation.

It is well known that at Vengsarkar’s insistence, a 15-plus with curly locks was asked to bat at the India nets. Tendulkar reveals it was Paranjape who impressed upon the then India captain that this boy was worth a look. Vengsarkar did that for a reason. When he was an emerging player, Paranjape had got the legendary Vinoo Mankad to watch Vengsarkar and offer encouraging words. There are more instances like these in this book. In most cases, the player concerned came to know afterwards who had done the talking and what eased their transition to the next level. Not to forget, Cricket Drona also reveals the origin of famous nicknames that stuck — Sunny, Colonel, Marshall Patil — and who coined them.

Through these memoirs, one understands how broad Paranjape's canvas was. Heart and soul of one of Mumbai’s most iconic cricket clubs called Dadar Union, he imbibed in players of his and other teams and onlookers the importance of taking every ball seriously. He was also a go-to man for cricket-minded persons from other parts of India. “We used to talk to Vasoo whenever we got the chance... Because this little man knew everything about cricket that was worth knowing,” recalls former fast bowler and MRF Pace Foundation chief coach, Tamil Nadu’s TA Sekar. He goes on to mention it was Paranjape who told Tendulkar, Sourav Ganguly and Ajay Jadeja that they had no future in bowling before sending them back from being pace camp hopefuls to what they did better. 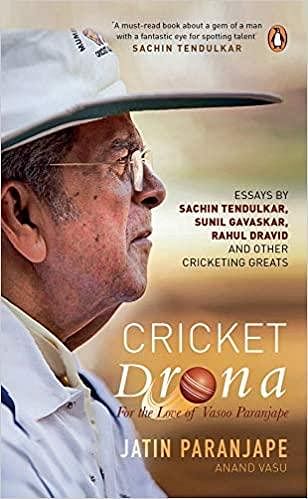 Cricket, or any game, is not just about big names. Stars become the face of their sports and enhance its popularity and credentials. Beyond them, lie characters who commit their lives to serve. Cricket Drona, intentionally or not, is a tribute to these unsung and selfless souls. Monotonous perhaps at times because of the format, but flawlessly edited and smartly packaged, this book will not disappoint those who want to learn about an institution of Indian cricket and what makes him one. It explains the correlation between results and reasons. This is a commendable attempt to tell the tale of a game and its lifelong devotee enriching each other.

Now we are on Telegram too. Follow us for updates
TAGS
Cricket Drona Vasoo Paranjape