‘In rooms where people are alone’

Here, the debut novelist speaks about her ideas of home and belonging, writing in an era of global climate change and what she intends to work on next.

NEW DELHI: Amanthi Harris’ novel 'Beautiful Place' came out of a holiday she took to Sri Lanka, where the writer “stayed in small guesthouses in peaceful rural locations” and felt herself “transported back to the houses and gardens of my childhood in the suburbs of a long-ago Colombo.” It was on returning to the UK that the Sri Lanka-born writer began composing the stories that developed into the novel, stories that were “about people returning to Sri Lanka full of nostalgia and memories, seeking a connection to their past and eager to reclaim lost lives”. Here, the debut novelist speaks about her ideas of home and belonging, writing in an era of global climate change and what she intends to work on next.

The idea of home, and what it means to belong, seems central to your narrative. Did this stem from a personal space?
I drew heavily on my grandparents’ house in Colombo, where I grew up for the sense of languor and contentment of being at the villa. But the villa is a made-up place, an ideal of simplicity and comfort, a place to feel safe in. I am intrigued by the question of how one belongs, and how it feels to belong, and this novel was a way of exploring how a sense of community and friendship can arise, even among strangers. 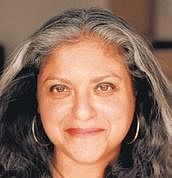 Climate change has become an important focus in a number of novels with South Asian authors also contributing and re-imagining landscapes through a non-Western perspective. Was the heavy nature imagery in an almost Edenic Sri Lanka as the novel’s centre, therefore, a conscious representation?
The house I grew up in, despite being in the city, was surrounded by a garden with many trees creating cool welcoming shade and rustling in the sea breeze from over the road. The garden was a constant presence, its greens and bright flowers visible from the veranda where we spent most of the day. A large part of being indoors was this sense of being open to the outside world, yet feeling sheltered and contained, and this was what I wanted to capture.

Would you also describe the book as an attempt at a philosophical novel?
The form of the novel, being so spacious a structure, afforded me the luxury of following several different characters as they reflected and interacted and made decisions to change. I didn’t consciously set out to write a philosophical novel. It was more a case of being curious about the thoughts and feelings of people grappling with the question of how they should live – a question that I too am intrigued by! The particular freedom of reading and writing fiction is that one can be present in rooms where people are alone, and can peer into the minds of characters and see what they are truly thinking!

Having written across forms – the novel, short stories, novella – which do you feel is the most challenging, as an author?
The novel so far was the biggest challenge, mainly due to the many characters and stories to organise and arrange in a composition that would work as a whole.

What are you working on next?
I’ve been working with a series of Grimms tales and old folk tales to explore aspects of motherhood, which will hopefully lead to another novel. I’m also working on some new short fiction. Rs 599,
Pan Macmillan India.

Now we are on Telegram too. Follow us for updates
TAGS
Amanthi Harris Beautiful Place