Of truck drivers and their arduous journeys: Author Rajat Ubhaykar on his latest book

The first leg in mid-2015 lasted about four months, and the second leg to south India was from December 2017-February 2018.

Rajat Ubhaykar’s debut book, Truck De India: A Hitchhiker’s Guide to Hindustan, was born out of journeying across the length and breadth of India with truck drivers. His narratives include making unexpected friends, witnessing Punjab’s tradition of truck art, travelling on Nagaland and Manipur’s insurgent-ridden highways, having Kashmir’s nomadic shepherds for company. Equally interesting is the way he juxtaposes these experiences with news clippings and other writings on the said subject. Excerpts:

What made you embark on this journey and how has it shaped you?

A sense of adventure, the desire to document the lived reality of the ‘informal’ sector, curiosity about the sub-culture of trucking, and interest in the ‘rule of law’ on Indian highways, motivated me. The journey has made me appreciate how fortunate I am to belong to India’s middle-class minority and be able to live in relative comfort. I have also started emulating the Zen-like patience truckers display when stuck in traffic jams or at state borders. I have found myself absorbing their unsaid dictum that things meant for you will come to you when they have to.

How many days and how much did you spend overall on this journey? 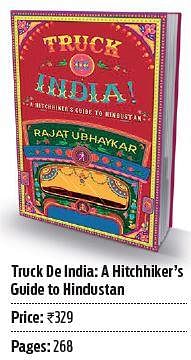 Do you think a woman could take this journey?

It would be definitely challenging for a woman. My hope is that India in the future will become safer with adequate amenities on highways.

What do you want readers to take away from the book?
The book will have served its purpose if by the end of it, readers begin seeing truckers in a new light, appreciate the challenges they face to deliver our goods on time, and acknowledge their unsung role in India’s economic life.

You have mentioned the problems that truckers face. What steps can smoothen their journey?

First step would be to build dormitories, toilets and parking infrastructure along highways. This ensures dignity, improves their productivity and also reduces accidents, many of which are caused by sleep deprivation. More challenging would be cracking down corruption in RTOs, which makes their life hell.

How has COVID-19 affected the truckers?
The lockdown led to significant difficulties for truckers. Especially, in the initial days when dhabas were shut and interstate transport was disrupted, which meant truckers were stranded on highways on the verge of starvation. However, things improved relatively as restrictions on interstate transport were lifted.