Caught in the web of trafficking

In 2008, Jennifer was deported from the US to India, the country where she was born, but had left behind 21 years ago as an eight-year-old.

In October 2014, writer and journalist Nandita Puri was introduced to Jennifer Haynes by her lawyer-activist friend Pradeep Havnur, who was working with the  Brussels-based organisation, Against Child Trafficking. On a cold day on February 3, 1990, Jennifer stepped onto American soil for the first time, where she met her new ‘parents’. Soon, she was sent to another family, whose members brutally abused her. Over the next few years, until she reached the age of 18, Jennifer changed 50 foster, remand or juvenile homes. Such a hedonistic lifestyle led her into self-harming habits and petty crimes, such as drugs, shoplifting and selling drugs. She was constantly living on the edge and always on the run. While serving prison term in the US, she was tricked into signing some legal documents that she was made to believe would facilitate her early exit from jail. In reality, they were deportation papers. 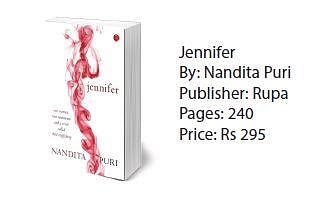 In 2008, Jennifer was deported from the US to India, the country where she was born, but had left behind 21 years ago as an eight-year-old. Without any forewarning to her family—and two young children who she had to leave behind—she was flown to Mumbai one fine day, where she knew no one and had nowhere to go. Jennifer decided to start life afresh in India, living in a shelter home for distressed women and taking up several jobs. She managed to meet her biological family in India, and found out that her mother was tricked into giving her away for adoption in America. Jennifer’s case is one of the strangest in the legal history of child trafficking. For the 20 years that she lived in the US, she was an illegal immigrant, and the relevant papers for her citizenship were never processed by the authorities.

Deeply disturbed by Jennifer’s hard-hitting story of injustice, Puri decided to write a book about her troubled life. She likens her story to that of a movie unfolding before one’s eyes, “riveting and at times, unbelievable”. In the book, Puri traces how inter-country adoption (mostly from various third world to developing countries) is often a garb for the ancient, age-old trade of human trafficking. Even though the 1948 Universal Declaration of Human Rights banned slavery and human trafficking across the world, the reality is quite contrary. According to the International Labour Organisation, more people are enslaved today than have been at any other time in human history. The number worldwide roughly stands at about 5.5 million children. Unfortunately, it is a thriving, lucrative trade, and a nexus of some of the most powerful stakeholders from the world of politics, education, government, royalty and even religion benefits from it.

One of the lines from the book aptly summarises Jennifer’s fate: “Laws are laws, and there isn’t much one can do if the victim is on the wrong side of the law, however unfair it is.” Even though Jennifer continues to live in India more than a decade after she first landed in Mumbai—and lawyers and human rights workers continue to work towards finding ways to send her back to her family in the US—little has been achieved. Despite longing to return home, Jennifer has made peace with her new life in India. However, what the book brings out most starkly through her life is that much like several others like her, Jennifer’s tragic circumstances stem from a convoluted system that profits from the abject poverty of so many innocent and helpless lives. In a sense, her painful story is possibly just one in a million of illegal inter-country adoptees, and truly embodies their ‘survival of the fittest’ spirit.

Stay up to date on all the latest Books news with The New Indian Express App. Download now
TAGS
Jennifer Nandita Puri