A day after the film Roop Ki Rani Choron Ka Raja (1993) was released, actor Sridevi, as well as her future husband Boney Kapoor, who was the film’s producer, were travelling together in a car in Mumbai. In the front seat, beside the driver, sat the film’s director Satish Kaushik. Satish turned, looked at Boney and said, “Sir, what is the box office collection of the first day?” With a budget of Rs 7 crore, it had been the most expensive film ever made.

Boney said, “The film has crashed.”

Satish broke down because it was his debut film as director.

Suddenly Satish felt a hand on his back. Sridevi consoled Satish by saying, “It’s alright. Don’t worry. Such things happen. It is not your fault.”

Satish was touched. “She had delivered a big flop, and I was responsible for that,” he says. “And yet she was consoling me. It takes a very big heart to behave like that.” 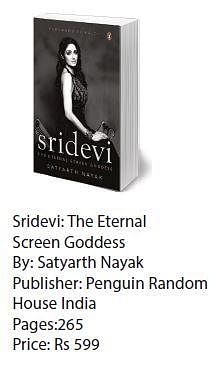 This anecdote is recounted in the well-written and engaging biography Sridevi: The Eternal Screen Goddess by Mumbai-based author Satyarth Nayak. Asked why he decided to write the book, Satyarth says, “Sridevi was India’s first female superstar. She was the only actress who was No. 1 in the Hindi, Tamil and Telugu film industry. She was also the only actress who made a successful comeback after a 15-year hiatus, following her marriage and motherhood with English Vinglish (2012). And, lastly, there was the prolific career: 300 films in five languages.”

As for the reasons why she became such a big star, Satyarth believes, “She was a very versatile artist. Sridevi could do comedy, tragedy, and drama very well. She was also a very good dancer.”
Actor Kajol, in the foreword, suggests a few more reasons. “Sridevi knew which script would work and which wouldn’t,” she writes. “She had the pulse of the audience at all times. She knew the camera so well—how it would shoot her, which was the best angle. She paid attention to the minutest of details. And her eyes spoke volumes.”And along the way, she had a big impact, especially on women. “Sridevi did comedy so well, there was a fearlessness in her that empowered women,” says Satyarth. “They realised they could just be themselves instead of being prim, proper and ladylike.” She also challenged patriarchy, sexism and fought for wage parity in Bollywood.

Another unintended impact was on the LGBTQ community. In her career, Sridevi played many double roles. This dichotomy appealed to the LGBTQ community where they have a public persona as well as a private one. “They could easily identify with her on-screen,” says Satyarth. The biggest impact on the community was through the film Nagina (1986) where Sridevi plays a snake who masquerades as a human being.

Finally, Satyarth deals at length with the sudden and inexplicable drowning of the star in a bathtub at the Jumeirah Emirates Towers in Dubai, on February 24, 2018, at the age of 54. Numerous conspiracy theories were bandied about, as well as allegations of murder. But Satyarth says, “It is all rubbish.”
After Sridevi’s death, Satyarth spoke to her husband Boney, South superstar Nagarjuna and Pankuj Parashar, the director of Chalbaaz. “All three told me Sridevi suffered from low blood pressure,” says Satyarth. “Nagarjuna told me that they were shooting a Ram Gopal Varma film—Govinda Govinda (1993)—when one day as they waited for Sridevi to come to the set, they heard she had fainted in the bathroom.”

Pankuj said that when they were shooting for the film Meri Biwi Ka Jawab Nahin (2004), on one occasion, Sridevi had again fainted in the bathroom. “She battled low blood pressure for a long time,” says Satyarth. “There were several instances when she had collapsed. Boney said sometimes when they were walking together, she would fall. What might have happened was that when she got into the tub in her suite in Dubai, she might have fainted and drowned.” Whatever the case may be, the fact remains that she was taken too soon and it is a big loss for the industry.