'A Plate of White Marble' book review: Travails of the new woman

Bandana, the protagonist, grieves over her husband's early death, but never conforms to the social connotation and ideals of 'widowhood', no small thanks to her uncle.

A Plate of White Marble was first published in Bengali in 1990. This is the story of the evolution of the 'new woman' of an era that has seen the dawn of Indian Independence. Bandana, the protagonist, grieves over her husband's early death, but never conforms to the social connotation and ideals of 'widowhood', no small thanks to her uncle.

"I cannot eat this anymore!" she protests as she looks down at her white marble plate, a white bowl and glass brought from Varanasi. These are specially kept for the widow's broth of boiled rice, potato and green banana. 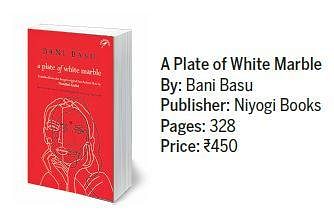 But she is determined to start life afresh and take the road less travelled by. Of course, it’s strewn with bumps of social bitterness. Her son is the only anchor in troubled waters, but soon that mooring will also get loosened.

Instead, she leaves the safety of 'home' and applies herself to a greater cause, by joining a children's home. The children's need is far greater than hers. Nandani Guha's translation brings to the fore a story from Bengal that addresses important social concerns of times gone by.

The house at Number 45, Shyambazar Street, had its date of construction engraved right at the top of its facade. It tells you that the house was not built in this century. Not exactly a 100 years old, but around 85 years in age.

Thanks to the the holy river flowing close by, the moisture from the Ganges combines with the salty winds from the Bay of Bengal to the south, ensuring that houses in Kolkata do not survive as long as the old manors in England.

Nothing less than first-class materials bought from reputed English companies, including marble-pillars, arches, tiles, original Burma-teak windows, doors, rafters and the limestone-layered, 20-inch-thick brickwork—continue to ostentatiously preserve the antique glory of these homes to this day. This carefully nurtured old world heritage, that almost passes muster as ‘aristocracy’, may well be called the Bengali version of stiff-necked orthodoxy, with all its evil fallout.

A walk along 40 feet of black- and white-chequered marble would lead you to a black marble stairwell. The corridor would start again, this time on the ground floor, 40 feet in length, chequered black and white, in exactly the same pattern. One had to walk down half its length to find the entrance to the dining room. And to walk this whole length in the afternoon could make one tired.

A Plate of White Marble lies in a building that is laid out like an army barrack. Rows on row of rooms crowd the southern end. Not just the first-floor rooms but even those built on the ground floor would, from time to time, get more than a waft of the legendary southern Kolkata breeze. To read this story is to walk into a distillation of the very heart of Bengal as it was in the 1950s.

This is the tale of the coming of age of a widow. She will not let the darkness weld around her circles of pain. She bucks the ‘system’. Liberation comes from whittling away, a bit at a time, to find gold in a lost mine.

Now we are on Telegram too. Follow us for updates
TAGS
A Plate of White Marble Bandana Indian widow