A delightful book of 11 short stories, each focussed on a different area and era of Bengaluru, Eleven Stops to the Present uncovers several unknown aspects of the city’s rich history and interesting past, albeit in a way that is both engaging and compelling.

For example, did you know that two of Bengaluru’s famous localities—Basavanagudi and Malleshwaram—were first established as ‘safe, hygienic suburbs’ when the city was affected by the deadly plague in 1898? Or the fact that Whitefield was developed as a self-sufficient farming community for Anglo-Indians way back in the 1880s? And that Winston Churchill, the erstwhile Prime Minister of UK, was a regular visitor at the Waverly Inn in Whitefield? Well, these are just some of the fascinating facts that have been mentioned in the new book published by the Bengaluru chapter of Indian National Trust for Art and Cultural Heritage (INTACH). 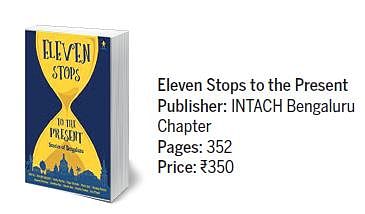 An insightful book, this one has 11 stories each narrated with an element of fun and is perfect for children learning the history of the city without sounding like a textbook. Written by 11 different authors, the stories cover time travel, battles, pre-historic times, and one of the stories even has an owl and a crow as protagonists! “There is so much history and heritage all around us that children (and even their parents) are unaware of. Most children just know Bengaluru as a city of IT parks and malls. What we wanted to do was to tell some stories of the past in a way that children of today would enjoy,” says Meera Iyer, convenor of INTACH, Bengaluru Chapter. She also adds that INTACH has vetted all the historical facts that the stories mention.

The stories explore myriad aspects of the city’s history, culture and evolution. One of them is centred around one of Bengaluru’s most famous and old area—Basavanagudi—known for the Bull temple and the annual groundnut festival. The protagonist travels back in time with a bull who is her ‘guide’. They take a whirlwind tour exploring the history of the city, its fort, food, festivals and the like. Another one is set in the pre-Independence times in Shivaji Nagar which was known as Blackpully then and covers the opening of the famous Russel Market which was established in 1933 as a one-stop shop for every conceivable kind of meat, fruit and vegetables. The story narrated through the eyes of Salma and her English friend William is heart-warming.

The story that describes the battle of Bengaluru is a significant one. It is surprising to note that the name ‘Bengaluru’ was first mentioned in a ninth century inscription in a temple in Begur, a small town off the Bangalore-Hosur highway. This was way before the city was discovered by Kempegowda in 1537 AD. The story also explores the concepts of the yesteryear stones that are important historical evidences found across the city. Then there are stories of the lesser-known legacy of the Jews in the city, the inoculation camps set up during the 19th century plague, the Spanish-style villa communities in yesteryear Whitefield and the well-planned, sustainable town centre or ‘pete’ originally planned by Kempegowda. The presence of pre-historic dolmens that are miniature stone houses installed in burial sites to commemorate the dead, in areas such as Bannerghatta, Devanahalli and even Lalbagh, is yet another interesting revelation.

All in all, it makes for a great read for children. It also encourages them to come out of their houses, explore their own streets and alleys, talk to neighbours, find out real life stories and basically look for history in your own backyard; beyond plain facts confined to the pages of a textbook.

Now we are on Telegram too. Follow us for updates
TAGS
Eleven Stops to the Present