Adulting is a potted plant that comes with its own thorns, and Arya gets severely scratched in the process.

So the trope is a time-tested and popular one: young adult (16-year-old, in this case) finds herself once too often at the receiving end of bullying/sneering/scoffing from the self-appointed elite set, and decides to turn avenger, get her back on them in a manner calculated to hit and hurt, hard.

This well-written and well-illustrated graphic novel is a welcome addition to the packed shelf of revenge stories. Batra is on-point when detailing Soundarya—who prefers to be known as Arya—and her existential pangs. And Ganapathy’s illustrations keep the reader, pre-teen, young adult or certified adult, engaged all through. Yes, the finale does read like loose ends tied up a little too neatly, but truth to tell, who’d object to a happy-ish ending for all concerned? 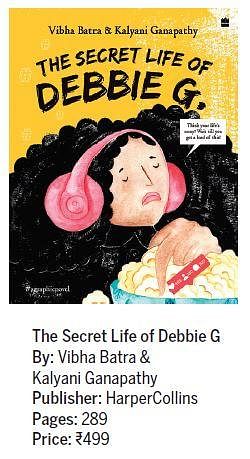 Arya is not the prettiest girl in school, though she probably is one of the brightest, if not the brightest of them all. She struggles with weight issues, and feelings of insecurity when her single parent mother decides to break their circle of two and marry again.

Thrown into the mix are factors like her new stepbrother and stepsister who come with baggage that connects them uncomfortably to our girl: she had a crush on the dim but good-looking ‘brother’ ages ago, and her new ‘sister’ is quite her Enemy No. 1. Add to that the casual cruelty of school kids (schoolgirls, mostly), some adjustment of the Tamil Arya and her mom to their new Punjabi family, her own fledgling might-be-romance and basically, things aren’t flowing too smoothly.

Given that the back cover uncovers the secret, I would be dropping no spoilers in saying that Arya creates her online alter ego Debbie G, and goes viral in no time. This is absolutely no surprise because Debbie G is basically dishing the dirt on her peers, foes and then, inevitably, on her friends too. Becoming an online sensation is a big deal but it costs Arya plenty, as she soon discovers.

This coming-of-age tale tackles issues of latent anger, self-esteem, of coping with the curve balls life sometimes throws at you, and does it with sharp wit, a sensitive gaze and much empathy.  For the most part, Arya handles everything that comes her way with superb sarcasm and self-derision, though it’s clear to the reader that this façade, sturdy though it may seem, is actually vulnerably thin in places.

Adulting is a potted plant that comes with its own thorns, and Arya gets severely scratched in the process. However, her angst doesn’t spill out too luridly over the pages and that restraint works well for the story. An engaging read, this.

Now we are on Telegram too. Follow us for updates
TAGS
the secret life of Debi G The Secret Life of Debbie G book review