Tender is the word: New poetry

Closer home, Ranjit Hoskote’s The Poet’s Life offers multiple views, and as the name suggests, tenderly describes the life of a poet along with his financial struggles.

If you wish to understand how a poet thinks about his craft, perhaps you can read Notes on the Art of Poetry by Dylan Thomas (1914-53).

“I could never have dreamt that there were such goings-on
in the world between the covers of books,
such sandstorms and ice blasts of words,
such staggering peace, such enormous laughter,
such and so many blinding bright lights,
splashing all over the pages in a million bits and pieces.”

The delight in this Welsh writer’s composition is infectious.

Closer home, Ranjit Hoskote’s The Poet’s Life offers multiple views, and as the name suggests, tenderly describes the life of a poet along with his financial struggles. 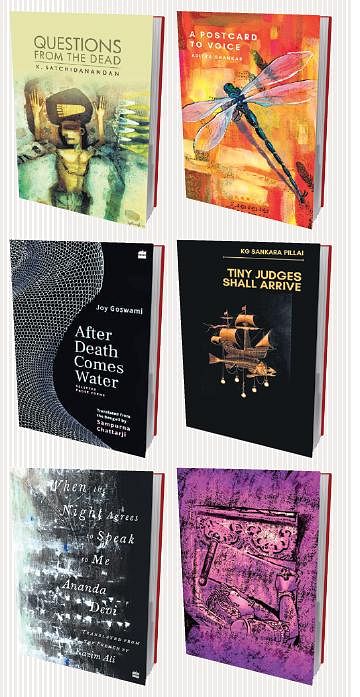 He noticed the oranges in the fruit stalls were shrinking.
He remembered in detail the railroad town where he was born.
He collected the rust and shadows that gather on aging metal surfaces.
He licked his stamps himself, the envelopes addressed in green ink.

Despite their own challenges, a poet continues to create evocative images for the reader. Take for instance the case of distinguished  Telegu poet Varavara Rao. The 82-year-old is incarcerated in the Bhima Koregaon case despite his failing health, but his new book is coming soon. Titled Varavara Rao: India’s Revolutionary Poet (Penguin Random House), this record of the author’s political beliefs,  is edited by Meena Kandasamy and N.Venugopal.

For Venugopal, the poet’s nephew, to make Rao’s work accessible to English readers was his “dream for decades.” According to Elizabeth Kuruvilla, Executive Editor, Ebury Publishing & Vintage Publishing, Penguin Random House, “Meena is a distinguished poet and Venugopal has seen the work quite closely. Many poems in this collection were actually chosen by Rao himself before his arrest.”

Kuruvilla also talks about Avinab Datta’s debut collection, Annus Horribilis. The author is the recipient of the inaugural Vijay Nambisan fellowship. “Annus Horribilis is concerned with the violence of thinking alone.

The voice in these poems covers a range of subjects such as mental health, drug use, relationships, family, friendship, external disintegration, the labour of loving, being loved, and of caring...very hallucinatory.”

HarperCollins has announced two translations —When the Night Agrees to Speak to Me by Ananda Devi and translated by Kazim Ali, and After Death Comes Water by Joy Goswami, translated by Sampurna Chattarji. Sohini Basak, Editor, HarperCollins Publishers India, “Ananda Devi, one of the brightest stars in contemporary French literature, and Joy Goswami transformed Bangla writing — from our translations imprint, Harper Perennial. Kazim Ali and Sampurna Chattarji (respectively) who are extraordinarily talented poets and innovators themselves.”

Dhauli Books will publish The Vaishali Corridor, a bilingual collection of Anamika’s 25 best poems, translated by Vinita Sinha. A yet-to-be titled poetry collection by well-known poet Arun Kamal is also on the way. KG Shankar’s Malayalam poetry will be published in English as Tiny Judges Will Arrive. Aditya Shankar’s A Postcard to Voice is also forthcoming by the publisher.

This year, Speaking Tiger’s list features two poetry collections by Jerry Pinto. Asylum: Poems was published in 2003 and will be reissued, and I Want a Poem, are his new poems over the past five years.

Ravi Singh, Publisher and co-founder of Speaking Tiger Books, says, “I Want a Poem, deals with Pinto’s recurring concerns about  Bombay, friendship, his mother’s mental illness....” The publishing house will also launch Write Down, I’m a Miyah — poetry by Miyahs from Assam on their subjugation of being viewed as ‘outsiders’. “Translated from Assamese in English, this anthology is edited by Shalim Hussain, a Miyah himself,” informs Singh.

For Sarabjeet Garcha, Founder of Copper Coin, Borderlines: Poems by Manohar Shetty is significant “because it will come after his collected poems already published by Speaking Tiger. It has new poems written over the past three years.” Equally important is Questions from the Dead, poems by K. Satchidanandan, says Garcha. “The death of the Hindi poet Mangalesh Dabral shattered him as much as it crushed me. Satchidanandan wrote to me saying, ‘Mangalesh’s death broke my heart. This might be my last book.’”

Side trivia
Speaking Tiger Books will launch Write Down, I’m a Miyah — poetry by Miyahs from Assam on their subjugation of being viewed as ‘outsiders’