INTERVIEW| Writing this book was liberating: 'How to Raise a Feminist Son' author Sonora Jha

Jha speaks on how the process of raising a feminist child is not easy but so very worthwhile.

Sonora Jha, author of How to Raise a Feminist Son, tells Sheila Kumar how the process of raising a feminist child is not easy but so very worthwhile.

In a recent webinar tutorial, you discussed whether it is alright to make your child a character in your novel, or, the subject of your memoir. Tell us how you navigated a potential thicket of thorns regarding this.

Writers have drawn upon their families for generations when it comes to the people we write about. In the case of How to Raise a Feminist Son, I wrote about events that are clearly from my point of view, with an author’s note stating the subjective nature of such a narrative. In my novel, the 14-year-old boy has some traits of my son, but the story isn’t from our life at all.

How did your son react to being the central peg of your manifesto? Was he able to see the larger point here, or was he embarrassed?

Even before I started to write the book, I asked for his permission. He said I was allowed to write about his life up to the age of 18 and agreed to share his thoughts through interviews after that age. He definitely saw the larger point, the importance of this book, as well as his mother's desire to write it.

He helped me with some of the research, introduced me to his friends for interviews and also told me he didn’t plan to read the book, so I shouldn’t censor myself… a mixed blessing, this.

Was it difficult to write this book?

Yes, it was, but it was also liberating. A big part of it was written in the early months of the pandemic, so I was able to stay with the discomfort and go deeper into taking risks and be brutally honest and vulnerable, because I realised how little time we all have and how badly the world needs to change.

Yes, it called for curation, because a memoir isn’t a chronological and complete narration of one’s life but a story threaded with a theme. So, I wrote about moments in my life that were resonant with the theme of raising a feminist son, which, incidentally, happen to also be the most formative, fabulous, delectable moments of my life.

You’ve made it very clear that raising children to be feminist is an ongoing process. Does this instilling of the right values and principles get diluted as the child grows?

Yes. Several chapters of my book focus on the other influences that swoop down on our kids or even inspire them beyond our own parental imagination. But here's the thing - if we lay a good foundation of feminist values, our sons don’t have to outgrow the tenderness and empathy that are the pillars of feminism for boys. Once we give them a feminist lens, a feminist language, a feminist way of loving, they bring these to bear upon the other influences.

What do you have to say to Indian mothers attempting to raise feminist sons?

Yes, it's a tough ask but some of the best feminists I know live in India. I drew upon their feminism, which was my formative feminism, quite consciously.  I have something to say to Indian mothers and fathers and uncles and aunts and pretty much everyone in India - male entitlement and misogyny has led to nothing but masculine swagger and devastation.

If we let our boys and men be gentler, be more supportive of other genders, we will emerge in a world where we can heal. On a personal level, our boys will be healthier, less prone to rage or depression or violence. Let’s try it. 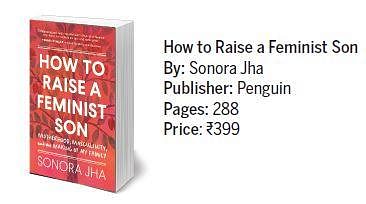 Now we are on Telegram too. Follow us for updates
TAGS
How to Raise a Feminist Son Sonora Jha Sonora Jha interview Feminism