At the time of his death in November 2020 following COVID-19 complications, he was preceded perhaps by only Rabindranath Tagore and Satyajit Ray when it came to reverence.

When it comes to books and interviews that are discussed for decades, more often than not, it’s what the reader reads that forms the part of the debate. However, there are times when what was left out also makes for interesting conversation.

While Amitava Nag's Murmurs: Silent Steals with Soumitra Chatterjee might not fall in the classical biography or interview sphere, it gives an interesting perspective to one of the greatest artists of all times.

Nag had the opportunity to spend a significant amount of time with the thespian while working on his book Beyond Apu: 20 Favourite Film Roles of Soumitra Chatterjee. In the conversation, the author and the subject exchanged many ideas that might not have made it to the book. Still, they nonetheless offer a fascinating insight into the legendary actor.

Through a vast range of subjects where Chatterjee’s views on myriad things such as his love for portraits, poetry, and even smoking—he tried smoking cigars during his younger days as he wanted to sound heavy- Murmurs allows a visit to the private space within him.

As these interactions, questions and answers were not 'interviews', they possess a stream of consciousness tendency. The narrative reads almost like a journal that Chatterjee would have kept. Perhaps that is the reason it’s more unorthodox than one could have imagined.

Reading about the actor talk about his passion for cricket, a fascination for drawing portraits or discussing themes and ideas of his poems or sharing his thoughts about anxiety, brings forth layers of personality that might have eluded the reader. Chatterjee laments the lack of grace in today’s cricket, which is hardly surprising as he was an ardent admirer of Sir Garfield Sobers. 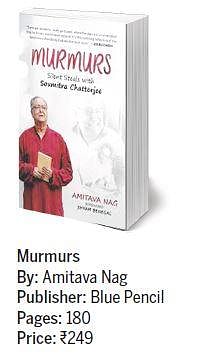 Nag writes how at times, Chatterjee would see him smoke in haste outside his house before their meetings commenced and shared his views on how he felt cigarettes understood a man better than a lover. The actor also switched to smoking pipes but found the experience too arduous. In his later years, he couldn’t stand the smell of smoke.

A Renaissance man in more ways than one, Chatterjee was more than a great screen actor. He published numerous plays and poems, held painting exhibitions, and there is hardly any great honour in the field of cinema and culture that wasn’t bestowed on him.

At the time of his death in November 2020 following Covid-19 complications, he was preceded perhaps by only Rabindranath Tagore and Satyajit Ray when it came to reverence.

Murmurs captures moments that portray a great deal more about the man and not just the icon. There is also a great deal of talk about old age, which traditional interviews do not emphasise. It is a welcome addition to the literature on Soumitra Chatterjee and one for the ages.

Now we are on Telegram too. Follow us for updates
TAGS
Amitava Nag Murmurs Beyond Apu Soumitra Chatterjee