BENGALURU: If you are looking for a place just to chill or hold a corporate get together, head over to Cafe Mojo Pub & Bistro on St Marks Road. But if you are going for Goan traditional food, which the pub claims is their speciality, hit the main course first, I would say.

The plain rice served with salad and pickle along with Goan Prawns Curry was delicious. The curry was rich and creamy and the Thai-based vegetable curry was a delight. Made in coconut milk gravy, it tasted sweet and looked richer than its non-vegetarian counterpart. 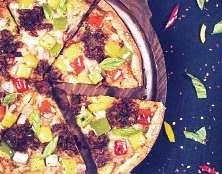 We tried a couple of starters along with some cocktails. The Fiery Crispy Potato had the crispy wedges glazed with hot and spicy red sauce. Cooked in oriental style with bell peppers and onions, the starter looked colourful and bright against the dim lighting of the restaurant. The sauce and bell peppers made it very spicy and reminds one of masala fries.

The description for the Bollywood Crackers in the menu reads crispy, crunchy, cheesy…rest is a secret. But the ‘rest’ in this case turned out to be a disappointing. The round patties were crunchy and cheesy, but also sour and oily. You may not enjoy this one unless you are a cheese lover.

The Chicken Cafreal is served with pav. Cooked in Goan style with coriander and mint flavour, giving it a green tinge. It lacks the said flavours. The meat was a little hard and did not look appetising.
The Spicy Prawns in Port Wine was better than the other starters. Do not go by its look. It does not look interesting but tastes better compared to the rest. Simmered in butter, port wine and crushed red pepper, the prawns were served, topped with chilli flakes. It had a strong flavour of vinegar and tasted sweet and sour.

The cocktails lacked alcohol punch. The Watermelon basil is said to be well balanced drink to cool you down with a refreshing mix ginger, basil and vodka but you could barely feel the kick, making it just like a juice. The Lemon Drop is suggested as a tangy refreshing vodka cocktail with a burst of fresh lemon. Well, you feel the burst of fresh lemon, making it taste more like a fresh lime juice, rather than a cocktail.

It lacks the alcohol punch. The Lusty Chocolate has a consistency of melted chocolate and icecream. The menu reads ‘this sweet version made of vodka, chocolate syrup, baileys and fresh cream is so sophisticated in taste that you don’t want to share.’ It reads true, you wouldn’t really like to share, not because it is a sophisticated drink but the mix of milk, cream and alcohol was not soothing. To be safe with the choice, you can go for Mai Tai or the Orange Blossom. The Orange Blossom is a vodka-based tangy and refreshing drink.
Among desserts, Bebinca, a Goan dessert is a good choice. The pudding, made with flour, sugar, egg yolk and coconut, is served with a scoop of Vanilla ice cream, topped with chocolate sauce. You can feel the sugar syrup lingering in your mouth. Definitely my favourite pick from the dinner night.