When Asian cuisine came knocking at my door

Delivering food to our doorstep but ensuring the plastic box is wrapped well with a banana leaf, 48 East makes a neat presentation with Asian cuisine.

BENGALURU: Delivering food to our doorstep but ensuring the plastic box is wrapped well with a banana leaf, 48 East makes a neat presentation with Asian cuisine.

The Chicken and Saga Dumplings was a satisfying non-vegetarian relish. The yellow ombre colour of the round dumplings, made it the most appealing. The spongy and non-oily dumplings was an easy bite. The chicken was tender but not as juicy. The three flavoured sauces – wasabi, chilly flakes and sweet – gave each dumpling a distinct flavour. 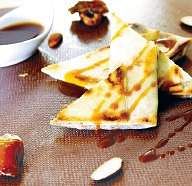 The next highlight was the flaky rice that livened up the main course. Be it the Philipino Adobo Chicken rice or the Korean Kimchi Bokkeumbap, the long-grained rice was well cooked and the ingredients were well-blended. Fish Ginger Scallion Fish that was served with Hunan noodles was aromatic, but I expected more with the taste. The steamed fish cooked Vietnamese style was a bit soggy by the time I dug in. However, the noodles, like the dumplings, were not oily.

The vegetarian Bulgur and Bean Kibbeh, a Middle-Eastern dish fell short of flavours, but the grainy cracked wheat ball went well with the smooth texture of the white sauce. Vegetable wantons that looked like shells spread out was topped with soy sauce. The stuffing of the wantons was thronged with veggies. Chicken Jujeh Kebab Salad, bountiful in fresh veggies including red cabbage, lettuce capsicums and diced pineapples and lime, was a fresh delight.

The chicken was marinated to its core, but was a bit too heavy to qualify for a salad.
The desserts, Date Halwa Martabak was like a thin Kerela Ada with finely minced date stuffing. Pineapple Crumble Jar that looked quite pleasing was a sugary dance in the mouth.
48East, a Bengaluru-based food delivering company updates its menu weekly with cuisines that are inspired from 48 countries of the eastern hemisphere.