From being a breakfast staple to a food trend, dosa has come a long way. While many Chennaiites love the new flavours, many prefer its old version.

CHENNAI: From a simple crispy breakfast served with hot sambhar to a scrumptious snack of several lip-smacking varieties, the simple dosa has come a long way. Now there are varieties like pizza dosa, cheesy pasta dosa, chocolate dosa…the list goes on, and there around five different restaurants and brands in the city curating more flavours to their menu to appease the ever-growing customer base. We delve into this latest street food trend that has got Chennai’s foodies on the edge. 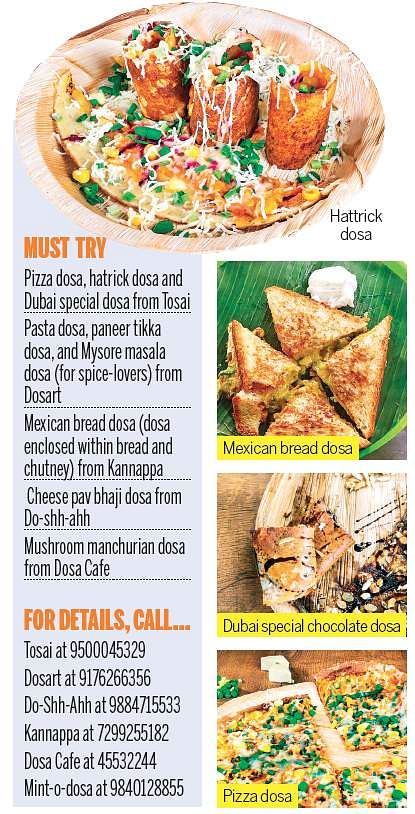 Chennai’s first dosa-exclusive centre was started in Velachery about a year ago by entrepreneurs Dhamodharan and Sheik Dawood. “In our travels across the country, we realised that street food is a big hit with the public. We wanted to venture into the food business; we ideated about Tosai as Chennai didn’t have such a place yet,” says Sheik Dawood.

As we arrive at Tosai Anna Nagar, the large crowd watches, mesmerised, as the chef expertly pours a large dollop of batter on to the black stove, rounding it out with a davara before adding generous amounts of cheese, curry, peas, and vegetables and spreading it out evenly. Next comes cheese, loads and loads of it, grated over the entire steaming ensemble, before cutting it out evenly like a pizza — taking all but five minutes to make the famous pizza dosa from Tosai is the fastest selling among its 99 varieties.

Pushing the numbers a bit further is Dosart, Kilpauk, which boasts around 111 flavours. “We added paneer tikka, pasta and Maggi varieties of dosa too, which no one else is doing in the market,” claims Anish Akkalaneni, co-founder, Dosart, that was launched last month.

Fans of the trend say what they love most about this is the surprisingly new flavours and combos. “For ages, we have eaten only the simple dosa with sambhar and chutney. And now, to be able to taste this many types is a wonder,” says Gopalachari, a retired CA, who says he plans to come often to taste all the varieties at least once.

While there are several fans, there are some who feel the traditional plain dosa is the best. “This idea of 99-variety dosas is not new, as northern cities of Tamil Nadu had it long before. Tosai’s unique creations like dry fruit dosa, pizza dosa, and Dubai special are great. Other varieties didn’t impress me much as they were repetitive,” says Arun, food critic on Zomato.

Sudharshan, another foodie, agrees, adding,“For me, a dosai should be simple and easy to eat. I don’t like something filled with cheese and other condiments,” he rues.

Stay up to date on all the latest Food news with The New Indian Express App. Download now
TAGS
Dosa