An aficionado of food styling and plate presentation, chef Tarun Sibal tells a story through every dish he presents.

NEW DELHI: It’s not many a school kid who knows exactly what they want to do when they grow up, but clearly Tarun Sibal wasn’t among that number.

“I was determined to be a chef from before Class X. I’d already grown up in an environment surrounded by food, thanks to my family, so I knew what I wanted to pursue as a career, it was in my bloodline, so to speak,” says Sibal, the third generation of a family intimately involved in Delhi’s catering industry. 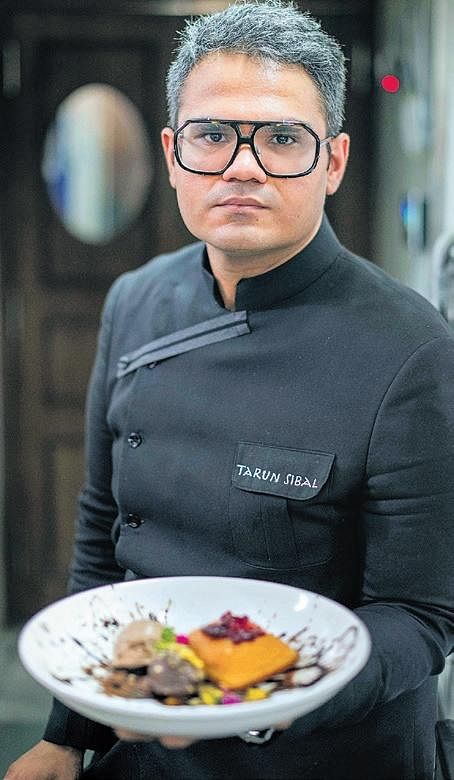 Sibal began climbing the culinary larder, um ladder, as an Institute of Hotel Management (IHM) – Pusa alumnus and started off as a kitchen trainee in 2003, at the India Habitat Centre in Delhi, which was and is managed by Rohit Khatter’s Old World Hospitality brand.

“It was in 2006, by which time I had become a sous chef, when I bid farewell to kitchen operations, at least as a chef. I went on to do an MBA, explored food and beverage marketing, and managed three international food courts during my corporate days,” recalls Sibal, noting that it was at this time that the alcohol and wine segments also became part of his repertoire.

“I donned my chef coat again in 2015, and it may sound strange, but this period in which I hadn’t been cooking actually helped make me a better chef,” says Sibal, who believes his grounding in the management and marketing of food and beverage brands helped him gain a holistic understanding of the hospitality industry.

Since he’s put the toque back on, Sibal has reiterated his family business into a boutique catering service known as One Fine Meal and has also opened his own restaurant (“an Indo-international affair, located in Vagator, Goa”) called Titlie.

He has also worked as a chef consultant for launching the new restaurants and has consulted many restaurants like Street Storyss in Bengaluru, Sidecar in Delhi, Loft by Clock Tower in Gurugram, and Ministry of Sounds in Noida, among others.

A firm believer that food has evolved beyond geographic designations, Sibal’s philosophy is what he likes to call “collaborative cuisine”, wherein ingredients and cooking techniques from around the world come together on a plate. And Sibal loves his plates.

An aficionado of food styling and plate presentation, Sibal tells a story through every dish he presents.

“My food philosophy is that firstly I need to have food on the plate. It can’t be a 20 inch platter and only two inches of actual food. Then I like to customise and personalise the dining experience and its presentation as much as I possibly can for the person and for people who are going to eat it. This includes everything from the base ingredients of the dishes, the type of client having it, to the type of setting they’re having the meal in, and the time of day it’s being had,” says Sibal.

As far as narrative structures go, we couldn’t do better ourselves.

Stay up to date on all the latest Food news with The New Indian Express App. Download now
(Get the news that matters from New Indian Express on WhatsApp. Click this link and hit 'Click to Subscribe'. Follow the instructions after that.)
TAGS
Tarun Sibal