There are countless examples of people taking up running to stay fit. And the state is leading the race with a number of clubs, dedicated to the activity.

Baba Fauja Singh is an inspiring sight. At the young age of 106, the world’s oldest marathoner is still making heads turn. And, of course, there is the 75-year-old Amar Chauhan, famously known as ‘Uncle ji’. Hailing from Mohali, this former Punjab Government employee has run a total of 39 half and full marathons. There are countless examples of men and women who have taken up running at various points in their lives propelled by a simple desire—to be fit. And Punjab is definitely showing the way.

Whether you’re a beginner or a hard core athlete, just strap on your shoes and join a running club in Punjab. In the last one year, around 25 running clubs have been established in various cities of the state. Boasting around 1.5 lakh members, these clubs in Chandigarh, Patiala, Ludhiana, Bathinda, Amritsar, Jalandhar, Ferozepur, Mohali, Muktsar are not only promising a healthy lifestyle but also a sense of adventure to retirees.

Chauhan, who retired as Special Secretary from Punjab Government in 2001, says, “I saw youngsters in Abbotsford running, so I decided to run too. I participated in my first half marathon in May 2012, and there was no looking back. I have won 35 marathon events in the 70-plus age category.” He wants to climb Mount Everest on his 80th birthday and run for the Chandigarh Distance Runners. 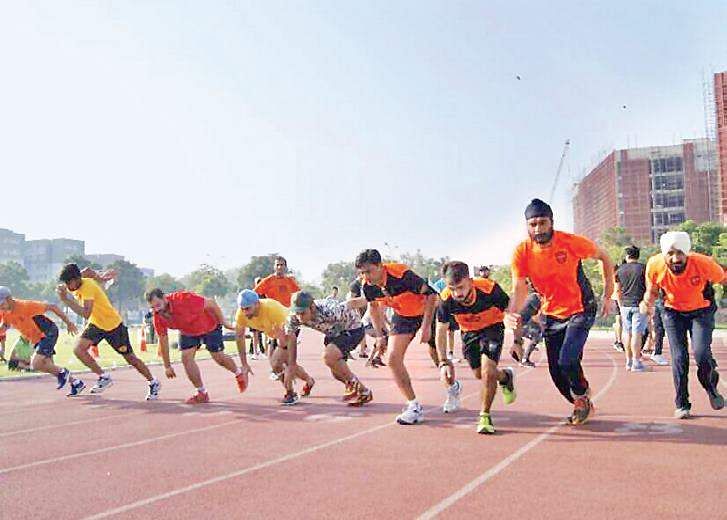 A 1994-batch Indian Forest Service officer of Punjab cadre, Dharminder Sharma, who has formed six running clubs in the state (Chandigarh Runners, Patiala Runners, Ludhiana Runners, Bathinda Runners, Jalandhar Runners and Amritsar Runners), says, “I along with some like-minded friends established the Chandigarh Runners couple of years back and now the club has around 4,000 runners and the Patiala club has more than 12,000 members—the biggest in  the state.”The members of these clubs run on weekends. All these clubs organise their own running events, including half, full and ultra marathons.

Taruna Sharma, who owns a travelling group, started the running club ‘We Run Ludhiana’ in 2016. He says, “People have become health conscious. They want to run but not in air-conditioned buildings, but rather out among nature.”Not very long ago, there was hardly any running culture in Bathinda, but now all that is changing, Tejinder Singh says. He started his Bathinda Runners Club and is all set to organise the first Bathinda Marathon on March 25, which is expected to see see participation of more than 500 people.
Dr Sumeet Kumar Jarangal, Deputy Commissioner and the brain behind the Muktsar Marathon to be held on March 18, says: “We have got 5,000 registered confirmations and expect 10,000 runners to take part. People are becoming more fitness-oriented.”

In his forties, farmer Simar Kamboj runs daily for five kilometres and is an active member of Patiala Runners. Patiala is a city of gardens, says Kamboj, and people love outdoor activities. This egged enthusiasts to channelise it in a professional way and organise runs. These runs see immense participation across all age groups.Paveela Bali, founder of the The Run Club in Chandigarh, says often people are scared to go to gyms as they might end up exercising alone. “While running together people form a bond. It’s a community of runners and people feel comfortable,” she smiles.

“I along with some
like-minded friends established the Chandigarh Runners couple of years ago and now the club has around 4,000 runners.”Dharminder Sharma, Indian Forest Service officer who has formed six running clubs