With the study presenting a novel approach of estimating the entire spectrum of mutants in infected individuals, it will also help in describing viral evolution more effectively.

BENGALURU: Researchers at the Bengaluru-based Indian Institute of Science (IISc) are on the brink of winning a major victory against drug-resistance in Hepatitis C virus. And, this crucial war is being won using mathematical models. What’s remarkable, the research breakthrough has been achieved through a mathematical model in which, how the virus mutates and the range of pathways it takes to develop drug-resistance, has been exposed. This exposure could help the pharmaceutical industry develop drugs and drug combinations that can overcome drug-resistance in - in this case - Hepatitis C virus.

This also opens up the horizon for a lot more - the method can be  replicated to fight and overcome drug resistance in viruses and bacteria causing a slew of other diseases which stubbornly resist the effects of various drug combinations.

In the research article, published in the peer-reviewed open access US-based journal ‘PLOS Pathogens’ on April 1, the IISc researchers, led by Prof Narendra M Dixit, Prof, Department of Chemical Engineering, and associate faculty at Centre for Biosystems Science and Engineering, IISc, explain that they achieved the feat of understanding the virus’ pathways to drug-resistance by constructing a multi-scale mathematical model.

The model estimated the pre-treatment mutation frequencies of the entire spectrum of the Hepatitis C virus. Based on that, they were able to accurately describe intracellular evolution of the virus that develop drug-resistance.

The research paper states that by using the model predictions the team was able to capture experimental observations, explained confounding inter-subtype differences in the virus, and unravelled the massive diversity of accessible resistance pathways to expose how exactly viruses developed resistance to drugs.
“Our study would help describe viral evolution more accurately, (and) optimize drug treatments and design vaccines (for Hepatitis C),” the researchers said in the paper. The researchers’ approach was based on the fact that the spectrum of mutated virus existing in infected individuals defines the diversity of drug resistance pathways accessible to the virus. The researchers explained that drug combinations that are able to block these pathways most effectively are the ones that are likely to elicit the best responses to treatment.

Prof Dixit said this kind of screening before treatment would help specialists decide on the best drug or drug combination to use to effectively treat Hepatitis C, without which the mutated virus that develop drug-resistance can avoid detection, rendering treatment ineffective. Prof Dixit told The New Indian Express, “As the virus mutates to develop resistance to drugs, it is important to find a combination of drugs that makes it hard for the virus to escape. But for that to happen, first it is all the more important that we understand how the virus mutates and which are the pathways that the virus uses to develop that drug-resistance. Our research does that.”

He said, these days, patients are “dosed up heavily” with drugs to treat the disease. But that not necessarily mean that those are the right combination of drugs for effective disease treatment.”For optimal use of drugs and drug combinations it is very important to understand how the virus that is to be destroyed has mutated to develop drug-resistance and then decide on the nature of drugs and their combination,” he said.

Drug resistance has emerged as a major cause for concern while dealing with a range of diseases with multiple drug combinations failing to put down viruses and bacteria. The three others in Prof Dixit’s research team are research students Rubesh Raja (who along with Prof Dixit, conceptualised, investigated and formally analysed), Aditya Pareek and Kapil Newar (both involved in formal analysis and investigation), all from the Chemical Enegineering Department of IISc.

WHAT THE RESEARCH DID

The study presented a novel approach to estimating the entire spectrum of mutants present in infected individuals, explains several clinical observations associated with chronic Hepatitis C, and presents a framework to aid optimisation of  treatment

The significance of the research lies in the background of World Health Organisation (WHO) publishing the Global Hepatitis Report, 2017. It outlines the baseline for the drive towards elimination of the disease, the rate of new infections (mainly due to mutation-caused drug-resis tance),and the prevalence of chronic infections and mortality caused by hepatitis virus. Also, according to WHO data, there are sixge notypes of the Hepatitis C virus andeach of them respond differently to treatment, besides mutating and developing resistance to drugs. Worse, it is possible for a person to be infected with more than one genotype.

THE SPREAD AND THREAT

Globally, an estimated 71 million people have chronic hepatitis C infection. A significant number of those who are chronically infected develop cirrhosis or liver cancer (hepatocellular carcinoma). Approximately 3,99, 000 people die each year from hepatitis C. Antiviral medicines can cure more than 95% of persons with hepatitis C infection, thereby reducing the risk of death from liver cancer and cirrhosis, but access  to diagnosis and treatment is low. There is currently no vaccine for hepatitis C; however research in this area is ongoing. 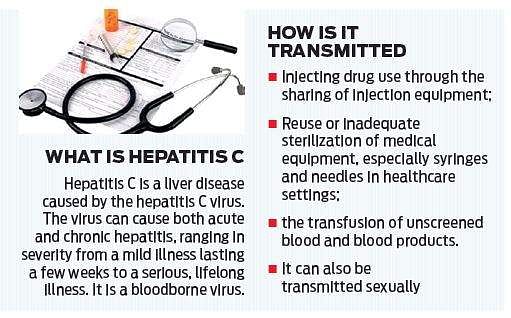