Common symptoms of Covid-19 include fever, cough, sore throat, fatigue, diarrhoea, and a loss of smell and taste.

What does it do?
Common symptoms of Covid-19 include fever, cough, sore throat, fatigue, diarrhoea, and a loss of smell and taste. In some of the trials conducted, scientists have associated these symptoms with an altered state of zinc homeostasis, explaining that an adequate intake of the compound may weaken or prevent some of these symptoms. “Zinc works as an ion carrier. It produces repulsive forces, which break the binding of the virus by hampering its entry into the cells.

If the virus still finds its way in, zinc controls the damage,” says Wali. Multiple antiviral effects of zinc have  been demonstrated in a variety of viral species, including norovirus, of which SARS-CoV-2 is a variant.  “This makes it clear that taking zinc supplementations is one of the easiest ways of safeguarding yourself,” according to Professor Sheffali Gulati, Chief, Child Neurology Division, Department of Paediatrics, AIIMS, Delhi.

What’s more?
Scientists believe that zinc is essential for its more than 300 enzymes, which help maintain metabolism, digestion, nerve function and other important operations in the body. “It’s an anti-inflammatory and an antioxidant micronutrient, and is found to be effective for the prevention of acute respiratory infections in young children. Recently a study showed the benefits of zinc in the treatment of autistic children,” says Gulati. Another study carried out at AIIMS, among 51 children with autism, found that serum zinc was below the lower reference range in 92 percent cases in the ASD group and 33 percent in a controlled group. This indicates its importance for ASD children as well, she reiterates.

A cause for concern
According to Gulati, people tend to go overboard with supplements. “If your consumption of zinc through food is adequate, it’s advisable to take zinc supplements only after checking with your doctor. It may turn out that you may not require it,” says Dr Priyanka Rohatgi, Chief Clinical Dietician, Apollo Hospitals, Bengaluru. 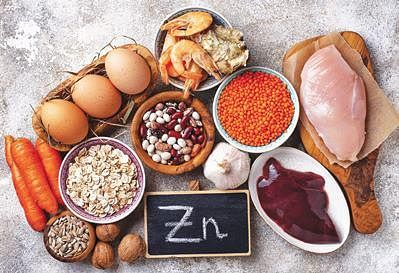 The Vital Nutrient
* Our body needs zinc to make protein and DNA, which is necessary for carrying out several functions
* During pregnancy, zinc is a must for mental growth of the mother and the baby. In case of a deficiency, one suffers from lethargy, irritability, recurrent infections, slow tissue repair, rough skin, headaches and reduced lean body mass.
* Malnutrition is the main cause of zinc deficiency
* Zinc doesn’t get fully absorbed due to the presence of inhibitors like phytates

Now we are on Telegram too. Follow us for updates
TAGS
zinc COVID 19