The study, done by experts from Bengaluru and London, was undertaken to assess the effect on breast feeding practices on infant anthropometry and determine the factors affecting these practices.

BENGALURU:  A third of women use supplementary food for infants aged about three months and such babies have a 2.5 times higher chance of wasting compared to those who are only breastfed, according to a recent study. The prospective cohort study of 240 women titled Maternal antecedents of adiposity and studying the transgenerational role of hyperglycemia and insulin (MAASTHI) was conducted at a tertiary care public hospital in Bengaluru and published in Frontiers of Public Health, Children and Health in October.

The study, done by experts from Bengaluru and London, was undertaken to assess the effect on breast feeding practices on infant anthropometry and determine the factors affecting these practices. 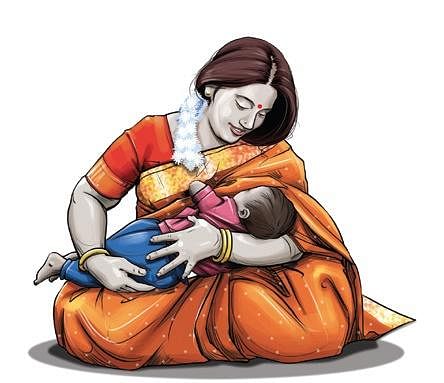 A third of 240 women enrolled in the study used supplementary foods for infants aged 14 weeks. Infants aged 14- 16 weeks who received supplementary feeding were at risk of wasting compared to infants who were exclusively breast-fed. Wasting refers to low weightfor- height where a child is thin for his or her height but not necessarily short.

It is also known as acute malnutrition and can increase risk of morbidity and mortality. Eunice Lobo, research enthusiast, who was part of the study, said data was collected in three stages from eligible participants with their consent between April 2016-April 2018. “One, during gestational phase, next, at delivery, and follow-up at 14 weeks post-delivery. We will be continuing it up to five years, to check on the child’s and mother’s health.

The reason the women started using supplements was not part of the study. However, there is lack of awareness on the importance of breast feeding,” she said. De - spite the gov- ern - ment’s recommendation of exclusive breast feeding (EBF) up to six months of age, only two-thirds of women do so, said Deepa R, research associate at Public Health Foundation of India, Bengaluru. “... 33% of the 240 women observed gave supplements such as cow milk, formula food mixed with water, and biscuits dipped in water, to children 14-16 weeks of age.

Children who did not have EBF had nearly 2.5 times higher odds of wasting, that is less weight for height. Also, 2/3rds of the women observed were from lower socio-economic status,” she said. Dr Giridhara R Babu, Head of lifecourse epidemiology at the Public Health Foundation of India said that in India, exclusive breast-feeding (EBF) rates remain less than 70% during the first six months, and is 54.2% in Karnataka, both in urban and rural areas. “Infants less than six months of age who were fed supplementary food were also susceptible to diarrhea, thus leading to weight loss,” he said.

Now we are on Telegram too. Follow us for updates
TAGS
infant health MAASTHI