'Only the heavy truth' with Shashank Mehta's health food brand

The video, which has garnered more than 2.5 lakh views in the two weeks it’s released in, sans any publicity, is literally a deconstruction of the concept of an ad campaign.

"I had been having the same problem from high school to adulthood. As someone overweight, I had followed all kinds of advice, diets, and exercises to lose weight, and while I had initially shed kilos only to put it back on," says Shashank Mehta, an IIM alumnus and former corporate marketer turned fitness enthusiast, who began his own sprint towards healthy living a decade and a half ago.

Tired of the constant weight fluctuation, Mehta began to thoroughly research all the elements that go towards determining the kilos, zeroing in on the misleading information provided by food companies on labels of packaged food the world over. 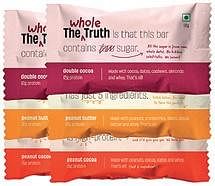 “They have these tags like fat-free and enriched and when you turn over the packet and squint and try and read the ingredients you see all the chemical names and numbers,” mourns Mehta, who chronicled his findings on his blog, fitshit.in, which has grown into a huge community where he and his followers from Delhi, Mumbai and beyond, discuss everything from intermittent fasting to the predatory practices of FMCG companies and their labelled lies.

It was this that led Mehta to decide to launch his own range of actually healthy health products, formerly known as And Nothing Else, before being rechristened The Whole Truth. “We decided to take matters into our own hands, by simply declaring each and every ingredient that goes into our protein bars and immunity balls, in the front of the packaging in big lettering,” says Mehta. “My friend Karan Talwar of Harkat Studios who shot our first ever ‘ad’, loves The Dollar Shave Club company for their advertising, which is direct, honest and upfront.

He was inspired to take that same approach for the YouTube video introducing the brand,” explains Mehta. The video, which has garnered more than 2.5 lakh views in the two weeks it’s released in, sans any publicity, is literally a deconstruction of the concept of an ad campaign.

There is no CGI, the only ‘actors’ are Mehta himself and the director’s wife and Harkat Studios co-founder, Mika, starring as the ubiquitous ‘hot girl with chocolate’, the ‘green screens’ are literally green fabric being hauled away by stage-hands in the background on screen, while Mehta talks about the ways companies fool us with colourful graphics, star talent, and meaningless jargon, while doing everything to bury the mention of any potential sideeffects in the fine print.

The bars are now available online from The Whole Truth’s website with free shipping across India, and are already doing well in Delhi-NCR, Mumbai and other cities. Mehta is firm in the belief that this is because his products are delicious, without any lies. The Orange Cocoa protein bar, for instance, which says it contains cashews, dates, whey protein, cocoa powder, almonds, and a dash of orange oil, contains only that. And nothing else.

Now we are on Telegram too. Follow us for updates
TAGS
Shashank Mehta