Children, is there anyone in this world who does not want to laugh? No. What restrains people from laughing openly is their pain and problems.

Children, is there anyone in this world who does not want to laugh? No. What restrains people from laughing openly is their pain and problems. If that fades, a smile will appear spontaneously on their faces. Today, an open laugh is a rarity. A smile has become mere facial movement. People laugh when they are with friends or hear a joke, but even then, the angst and turmoil within them overshadow their happiness.

A real laugh comes from the bottom of the heart. Such a laugh has tremendous healing power. It has the capacity to make us forget ourselves and to remove the sorrows of others. But when the mind is full of likes, dislikes, lust, anger, revenge and hatred, how can we smile with an open heart? 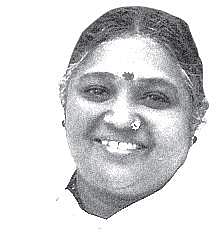 There are three types of laughter. The first two are laughing at other’s faults and mistakes and laughing at one’s own shortcomings and blunders. The third is the laughter of being absorbed in the pure bliss of the Self. The first is the lowest form of laughter. The second, the middle. The third is the highest. If we recognise our faults and shortcomings, laugh at them, and strive to transcend them, the third laughter will gradually become ours.

Unfortunately, today we mostly laugh at others. In doing this, we lose the ability to see and correct our own shortcomings and weaknesses.
A guru had two egoistic disciples. It was also their habit to criticise each other. Finally, the guru hits upon a solution. One night, while both the disciples were asleep, the guru painted their faces to looklike clowns. The next morning, the disciple who woke up first looked at the other one and burst out laughing. Hearing him, the second disciple woke up and saw his clown-faced friend roaring with laughter. Soon both of them were rolling with laughter, each pointing at the other’s face.

The first disciple brought a mirror to the second disciple saying, “Look, you clown! This face suits you well, so don’t wash it off.” The second disciple immediately caught hold of the mirror and turned it around, saying: “Look at yourself. I see a flourishing career opportunity for you!” But as soon as each disciple saw himself in the mirror, their laughter stopped.
This is how we all are. While we are laughing criticising someone else’s faults, someone else may be laughing at us, criticising our faults.

Children, it is easy to see and laugh at other’s faults. Only a wise person can laugh at his own shortcomings and transcend them.
Similarly, there are two kinds of happiness. One is our own happiness and the second is happiness at the sorrows of others. There are also two kinds of sorrows—our own sorrow and sorrow at the happiness of others.

Children, other’s sorrows should become our sorrows; their happiness should become our happiness. That is the path to real happiness. A self-forgetting laugh capable of imparting joy to others can never come from a mind covered with the dust of revenge, desire and hatred. That requires purity of mind and a love that overflows the heart. May everyone be able to achieve that.
The writer is a world-renowned spiritual leader

Stay up to date on all the latest Spirituality news with The New Indian Express App. Download now
TAGS
healing power laughter

BJD leader, 2 others die in fire mishap in Odisha