Cattle in religions across the world

There is something about cow and its progeny, which has earned it a revered place across the world.

Mankind has got common routes; we have originated from one and will merge back into one. Our gods and goddesses are one, so are some animals which we worship like snake, cow, and others.
There is something about cow and its progeny, which has earned it a revered place across the world.
At present, the term ‘holy cow’ has been associated with Bharatvarsh, but a look back in history reveals the omnipresence of this bovine goddess.

Ancient Egyptians worshipped the Hathor cow, and also the Apis bull. Such was the importance of this bull that they would embalm a dead Apis and bury it in a granite coffin. The famous excerpt from Exodus 32:1-32:45, where the people of Israel created a golden calf to worship in Moses’ absence, reveals the revered status of this animal in their traditional history.

According to Zoroastrian scriptures, Gavaevodata (uniquely created cow) was one of six material creations of Ahura Mazda who became the progenitor of all beneficient animal life. In Celtic cultures, bovine goddess Damona and Boann were worshipped. Norse tradition mentions the primeval cow Audhumbla. Cow was sacred to Hera, the Greek Goddess of women and marriage. 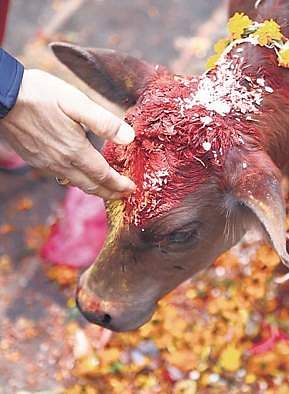 In ancient China and Japan, bovines were respected and there existed a dietary restriction and beef eating was a taboo. Bull forms a prominent figure on the seals of Indus Valley, revered as Nandi, the favourite of Lord Shiv. Rigveda—the oldest scripture in world history—calls cow as Aditi and Aghnya, that ought not to be cut into pieces. Atharvaveda calls her the fountainhead of all bounties (Dhenu sadanam rayeenaam—Atharvaveda 11.1.34).

The importance of products from a cow in a Vedic yagna cannot be undermined.
Thus it is safe to say that our ancestors, irrespective of the part of the world we belong to or have come to associate ourselves with, revered the cow and considered it holy. Cow and bull were universal symbols of fertility, strength and abundance—from Egypt to northern Europe to far-east. Holy cow is not specific to a particular religion, but a part of the common heritage of world.

Let’s not forget that according to modern science, a few millennia ago, the world was one big landmass after which the divide happened. It is also well-established that the earth was once submerged in water, and cultures across the world concur that there was just one group of survivors from whom mankind emerged—whether we call it Manu’s boat or Noah’s Ark, Deucalions Chest or Utnapishtim’s boat. The common origin of mankind is accepted by all.
The writer is the spiritual head of Dhyan Foundation. www.dhyanfoundation.com