Garuda Seeks Advice from His Father

The hungry Garuda took leave of his mother Vinata and swooped down to reach the land of the Nishadas in the middle of the ocean.

The hungry Garuda took leave of his mother Vinata and swooped down to reach the land of the Nishadas in the middle of the ocean. His beak became a straw with which he sucked the waters of the ocean, flapping his wings and whipping up a storm. Garuda positioned himself on the road in the ocean where the Nishadas walked and opened his mouth. They just began walking into his throat to meet their end in his stomach. 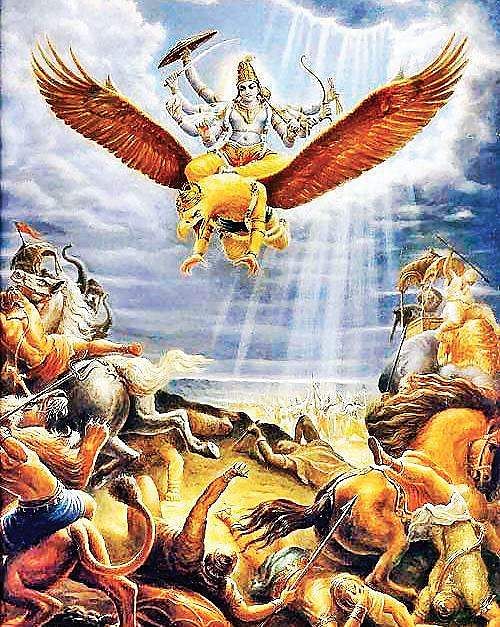 The bird closed his mouth after eating up many Nishadas whose main work was catching fish. Suddenly Garuda’s throat began to burn as if it was scraped by hot charcoals. He remembered what his mother had said and realised that there was indeed a knower of god among those who walked into his throat.

He asked the person to come out. He said that he would come out only if his Nishada wife too was permitted to come and Garuda agreed and told them to come out soon before they were digested by the heat of his stomach. This lover of the divine came out and sang words of praise for Garuda who glided high into the sky.

There are stories of birds like Garuda and snakes like Ananta, Vasuki and others in the Mahabharata because the author Veda Vyasa was called a Vishala Buddha or one who had an expanded and subtle intellect that pervaded all beings in this whole universe. With the same felicity that he could write about happenings in the human world, he knew the language and the driving force of other creatures too.

Also, the stories of the Mahabharata, Ramayana and other Puranas are not stories for the sake of our entertainment. They are tales woven around characters that bring out the dharmas or duties mentioned in the Vedas that human beings need to follow if they wish to live a happy life. Once such dharma pointed out in this small incident in Garuda’s life is that one should never subject the knowers of truth and seekers of god to any torture as it would instantly affect our own life on earth. Garuda soon met with his father Kashyapa and he inquired about his mother and brother, if they were doing well. He also asked him if he was getting adequate food to eat.

Garuda narrated how his mother was held captive by Kadru and his brother was doing fine. He explained the practical difficulty of not getting enough food and so he was not completely happy. “I have eaten thousands of Nishadas, yet my hunger is not satiated. I need strength to perform the task of getting the nectar from the gods to free my mother from her bondage. Tell me O lord, how will my hunger be satiated?” Garuda asked his father.The author is Sevak, Chinmaya Mission, Tiruchi; brni.sharanyachaitanya@gmail.com; www.chinmayamission.com