While one symbolises the strong power of creation, the other enthrals with its serenity and essence of Krishna’s land

Though associated with Hinduism and thronged by devotees, Somnath and Dwarka could be equally engaging for anyone irrespective of faith. Its fascinating history, coastal location and magnificent architecture enthrall and enchant.

Standing tall by the shores of the Arabian sea in Kathiawar peninsula of Gujarat, the magnificent Somnath Temple appears imperturbable. The quietude of the place belies the turbulence witnessed through centuries of it being ravaged and razed by marauding invaders. They looted and plundered umpteen times but the people of Somnath resurrected it again and again. Today the temple sees huge rush every day. Following a long queue, you pay obeisance to the revered deity.

As night falls, do not miss the son et lumiere at the back of the magnificent temple. Legendary actor Amitabh Bachchan’s rich baritone takes you back through the ‘Satya Yug’ in Hindu mythology to the fall and rise of Somnath in medieval history. Revered as the first among the 12 Jyotirlingas of Lord Shiva, the temple was built in gold, silver, wood and stone through the ages.

In most recent history, it was Sardar Vallabhbhai Patel who rebuilt it, after reintegration of Junagadh in India post-Independence. Dr Rajendra Prasad very aptly put it in 1951: “Somnath Temple signifies that the power of creation is always greater than the power of destruction.”

There is a sense of tranquility as you circumambulate the temple. As you reach the far end, the placid water of the Arabian sea gently washing the shores and the warm glow of fading sunlight stretching into the horizon uplift your mood. An arrow on a pillar intrigues—it indicates the direction straight to the South Pole, no land in between. 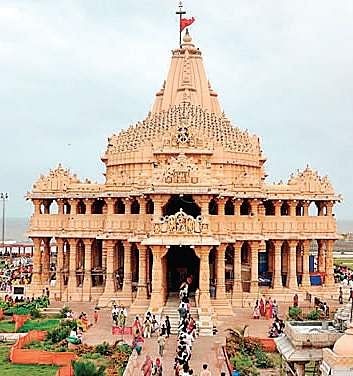 The importance of Somnath also lies in the fact that Lord Krishna took his last journey from here. Few hours from Somnath driving along the coast you could reach the divine Dwarka, the kingdom of Krishna.
Considered one of the four holy sites of Hinduism—the Char Dham—it has myths, history and ancient architecture. The original temple of Lord Krishna dates back 2,500 years ago, built by Vajranabha, Krishna’s grandson.

The present five-storied temple built on 72 pillars at a height of 235 feet was built in the 16th century. There are two entrances to the temple aptly called ‘Moksha dwar’ (door to salvation) and ‘Swarga dwar’. The latter takes you to the Gomati river down 56 steps. Take some time to admire the fine carvings on the temple.

There are several temples and ponds around but for some serene moment sitting on Dwarka beach could be quite relaxing and a bird-watcher’s delight.

The next day, a trip to Bet Dwarka, an island 30 km from Dwarka town, supposed to be the original kingdom of Lord Krishna, could be a fun-filled spiritual outing. A boat ride across the sea from Okha jetty would let your inner child come to the fore.

As colourful ships with big flags pass by, large seagulls soar high and then descend with a swish as passengers throw bird feed into the sea. The lucky travellers could even spot dolphins but it’s not that easy. On the island, you could explore the archaeological ruins.

Though you must walk a long distance from the jetty to the temple, hand carts are available for the old and infirm to be transported till the temple steps. While returning the local milkmen in traditional white clothes and twirling moustache would be sitting with large cans and buckets of milk. As they pour tumblers of milk for you to drink, you know you are indeed in the land of Krishna.