The lord of all beginnings

The occasion of Ganesh Chaturthi gives us a chance to reignite ourselves in the search for success and happiness.

What is the secret behind the immense popularity of the elephant-headed, pot-bellied, broken-tusked god who travels on a mouse? What does he signify? Ganesha is believed to be the lord of success who blesses people with their desired objectives.

He is widely revered as the remover of obstacles, the patron of the arts and sciences, and the god of intellect and wisdom. As the god of beginnings, he is worshipped at the start of every enterprise, rite or ceremony.

Ganesha signifies the goal of perfection that we are all seeking. The byproducts are unimaginable success and happiness. Every little detail conveys a deep concept that we can integrate in our lives to achieve our aspirations.

Legend says that Goddess Parvati created Ganesha from the turmeric paste she used while bathing. She then infused life into the mould and set him to guard the door while she went in to bathe. When Lord Shiva returned, Ganesha did not allow him to enter. Enraged at being denied entry to his own home, Lord Shiva beheaded Ganesha.

When Parvati came to know about the incident, she was heartbroken. She asked for him to be brought back to life and that he should always be worshipped before any other god. Shiva agreed to both conditions. He replaced her son’s head with that of the first living being his troops encountered. Thus the elephant-headed Ganesha was born. Till this day, Ganesha has pride of place in the Indian customs and traditions. All auspicious occasions and new ventures begin with a prayer to Ganesha.

It is said that sage Vyasa requested Ganesha to write the Mahabharata as he composed it. Ganesha agreed on the condition that Vyasa would recite the epic continuously. Vyasa put down a counter-stipulation that Ganesha must understand every verse dictated. When Vyasa needed a break he would compose a difficult verse that gave him the much-needed respite! Popular legend says it took them three years of continuous effort to complete the epic.

Lord Shiva represents the Spirit, the life-giving Force. Ganesha is symbolic of a perfected Soul. He also shows the way to that exalted state.Lord Ganesha’s head, the largest biological head, denotes the immense wisdom of a person of perfection. Wisdom comes when one reflects upon the knowledge gained from external sources. Ganesha’s large ears show receptivity to new ideas and concepts. An open mind is the first step to obtaining wisdom.

Emerging from the Lord’s head is the elephant trunk. The trunk depicts a well-developed intellect that arises out of wisdom. The trunk can uproot a tree as well as pick a needle from a haystack. Similarly, the intellect is of two kinds, gross and subtle. The gross intellect discriminates between pairs of opposites in the world; black and white, hard and soft, easy and difficult. The subtle intellect, on the other hand, differentiates between right and wrong, permanent and impermanent, higher and lower. It is colloquially called the conscience.

In an enlightened person, both gross and subtle intellects are well developed. Such a person has clarity of thinking that enables him to negotiate the challenges of life. He also has a clear sense of right and wrong that helps steer him to the Divine. Choices become unambiguous and life becomes a lot simpler. Without clarity of thought, our worldview gets confused and coloured by our own prejudices and preconceptions.

One of the key attributes of a perfected Soul is that he has risen above likes and dislikes, and is unaffected by the pairs of opposites in the world. The joys and sorrows, the victories and losses do not topple him. He deals with life as a sportsperson plays a sport, understanding that in the end, it is only a game. This transcendence over the pairs of opposites is indicated by Lord Ganesha having one tusk broken.

When we rise above the ups and downs of life, we develop the capacity to stomach the challenges that life throws at us. This is depicted by Lord Ganesha’s enormous stomach. One who attains the supreme state has the strength to remain untouched by even the greatest setbacks. Ganesha's posture with one foot on the ground and the other folded up conveys that while we need to operate in the world there must be a constant alignment with Atman, the Spirit. Whatever we do, there must be an unwavering focus on the higher goal. Without this focus, it is impossible to even succeed in the world.

The food at the feet of Lord Ganesha symbolises material wealth and power. The world amply rewards those who live a life of service and sacrifice. Those who turn spiritual acquire merit in their respective fields of activity and seldom go unacknowledged. They command the resources of the world, and earn fame and fortune even though they may not desire it.

The mouse as the Lord’s mode of transport magnifies the challenge that a spiritual person faces when trying to communicate the knowledge of the infinite Self through the finite equipment of body, mind and intellect. The mouse by the side of Ganesha represents desire. Just as the mouse is omnivorous, desire is all-consuming. It is never satisfied. Fulfil one desire and more pop up in its place. We fall prey to desire and remain subservient to it. An evolved person has complete mastery over desire. When desire is controlled by the intellect, what is an obsession, lust or craving transforms to aim, ambition and aspiration. This is far less stressful and you achieve the object of desire.

In his four hands, Lord Ganesha holds an axe, a rope, a modak (sweetened rice ball) and a lotus. The axe represents the annihilation of desire with the axe of spirituality. You need inner strength to overcome negativities. The rope is spiritual knowledge which helps us remove ourselves from the samsara, material world, that we are entrenched in.

The modak symbolises the happiness and joy a seeker derives from spiritual pursuit. And the lotus stands for that state of Self-Realisation that every human being aspires for, consciously or unconsciously. The lotus lives its entire life in dirty ponds, yet is untouched by it. Similarly, a person of Perfection lives in the world, interacts with it, enjoys life but remains untainted by identifying with the Self.

The occasion of Ganesh Chaturthi gives us, as spiritual aspirants, an opportunity to remember what Lord Ganesha stands for. A chance to reignite ourselves in the search for happiness. 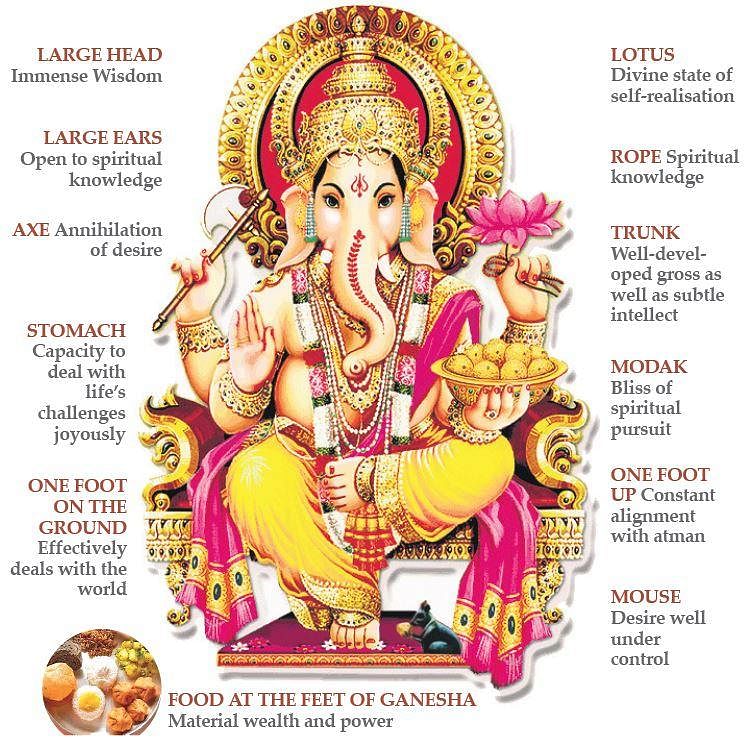 Now we are on Telegram too. Follow us for updates
TAGS
Ganpati Ganesh Chaturthi Lord Ganesha