Tucked behind high walls and barely acknowledged by a bustling city looms the Hill Fort Palace of Adarsh Nagar, Hyderabad.

Tucked behind high walls and barely acknowledged by a bustling city looms the Hill Fort Palace of Adarsh Nagar, Hyderabad. The palace, originally built in 1915 by Sir Nizamat Jung, then chief justice of Hyderabad State, had been kept closed for years, ever since it came under the Tourism Development Corporation in 1997. It had got mired in litigation over funds for renovation. 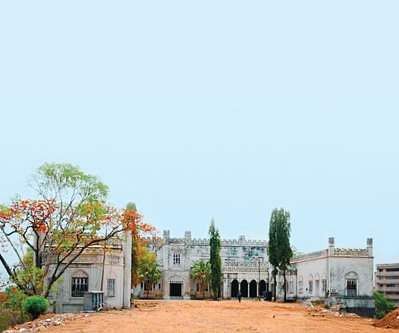 The prolonged neglect had kept the doors of the palace’s grandeur shut to the public—until a small hope glimmered over the prospects of its revival, when the Telangana government hosted ‘Telangana ku Haritha Haaram’ on its premises last month. Stakes are high that the palace will be restored to its lost glory soon, although authorities hesitate to affirm when, thanks to arbitration.

The palace, built in the style of an English castle, has attached to it fascinating stories from the annals of time. Anuradha Reddy, co-convenor of INTACH and a Hyderabadi, gets nostalgic when she talks of the place before it fell into oblivion. “My father used to visit the palace during its days of glory, when the Prince hosted cultural evenings. By my time, the palace was converted into a hotel, but still thriving. The swimming pool was open to public; the spacious halls were used as wedding venues. The hotel was designed tastefully, without changing much of its past aura,” Reddy says.

Sir Jung was fascinated by English castles so much so that he built his residence based on castles described in Sir Walter Scott’s novels. After 15 years, he decided to go on a pilgrimage to mecca. Seeking to lead a simple life, he sold the palace to Nizam VII, who allotted it to his younger son, Prince Mozzam Jah, who hosted mehfils and parties for the creme de la creme of the then Hyderabad. After the state was dissolved, the fort became a government property. It was leased to Ritz Hotel company, but in 1997, the government took it over again.

Now we are on Telegram too. Follow us for updates
TAGS
walter scott castle Hyderabad