Bengaluru's Malleswaram: Where live gods and their noble soldiers

Walk through the bylanes of Malleswaram, which was developed after plague of 1898,  for a glimpse of city’s history and a good cup of filter coffee

BENGALURU: Malleswaram is a hub of citizen activism, with protests organised against varied ill-advised government actions – be it tree-felling or converting a playground into residential layout. Interestingly, residents here have never taken things lying down, even a century ago. At a walk, conducted by Sahapedia Walks & Talks, the guide Sujatha Balakrishnan said that Malleswaram residents had raised hell for the British in 1890s for not providing them with proper sanitation facilities. This locality was later developed by the Raj when plague struck Bengaluru.

Sujatha said that residents here demanded that they be provided basic needs of potable water and hygienic surroundings. She said, “It is also said that they left corpses at doors of the officials as a sign of protest. The British were concerned that the disease could spread to the British-occupied areas too.” After relentless pressure from locals, the British officials developed this area as a modern example of a hygienic suburb.

Sujatha, who has been teaching history for 30 years, said that story-telling format always makes classes interesting. A theatre artist, she also uses the art form to teach lessons and takes students on field trips. A teacher Uma Panicker Sarath, who was at the walk, agreed that story-telling and seeing a place helps you feel more connected with the subject. This was her first heritage walk apart from the field trips from her school. “I had heard stories about Malleswaram from my librarian. She lives here. But seeing these places is a completely different experience,” she said.

Most residents in this locality are unaware of its heritage structures, said Archana Magundi and Ashritha Shri. Ashritha, a BSc student who lives in Malleswaram, said, “I have known this places but didn’t know about its history. The walk helped me understand my neighbourhood better.”Archana, who had studied in a government girl’s school in Malleswaram, said, “I did not know that my college building was once a private palatial bungalow of Nanjundaiah,first vice-chancellor of Mysore University.”

Participants also said that such walks help them see how locality has changed. Uma, said, “You can see small old buildings placed between huge commercial establishments. You train your eye to see  a mix of old and new things here now,” said Uma.The walk ended with a filling breakfast at New Krishna Bhavan. The owner Gopinath spoke about how his restaurant manages to run ‘zero waste’.

Kadu Malleshwara Temple, 15th Cross
Shiva, as Mallikarjun, is the main deity in this temple on 15th Cross, Malleswaram. The temple is also known as Mallikarjun Swamy Temple. This locality, which was earlier known as Mallapuram, was named after this temple in the late nineteenth century. Venkaji Rao, step brother of Shivaji, is credited with building this temple. There is an inscription on the rock that reads whoever tries to destroy or harm the place will be reborn as crows and donkeys. If it is done by a Hindu, it would be considered equivalent to eating a cow in Kashi and if it is damaged by a Muslim, it would be equivalent to eating pork. 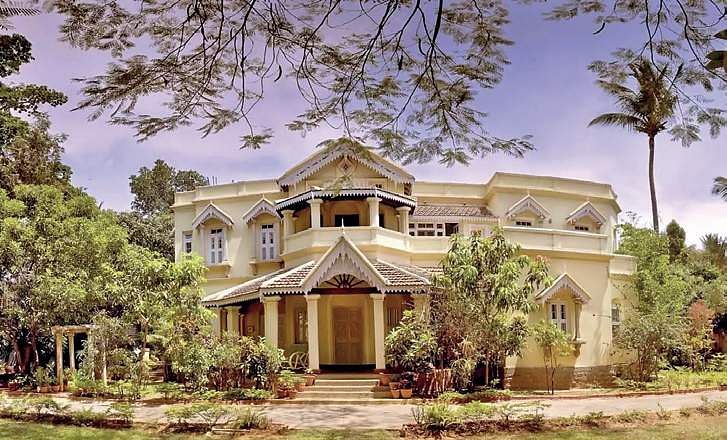 Villa Pottipati,4th Main Road
The building was built in 1865. Wilson, the caretaker, said, “Malleswaram was a forest area and there were very few houses back then. When the plaque hit the city, the British officials were asked to shift to this neighbourhood.” The house was bought by a businessman from Andhra Pradesh Ramalinga Reddy in 1925. The place was then leased out by the third generation of the family to Neemrana Hotels.

Venugopala Krishnaswamy Temple, 11th Cross
Originally, Nambi Narayana Swamy was planned as a main deity at the 115-year-old temple but, during the course of the construction, it was changed to Venugopalaswamy (infant Krishna). It is said that God appeared in Dewan Venkataranga Iyengar’s dream and asked to install deity of Venugopalaswamy. The deity were donated by Mysore Maharaja. The royal family donated a sum of 3,750 varahas (the then currency) and the local residents contributed 1,1794 varahas for the construction of the temple. It is also believed that couples’ prayers to have a child also comes true if they tie a small swing to onto temple’s ancient beams.

CTR, 7th Cross Road, Margosa Road
The Central Tiffin Room was started by Y V Subramanyam and brothers in 1920s. “It is said that they did not want the staff to be overburdened with work and hence, the family and friends of the owners would help serve at the restaurant,” said Sujatha. It was later established as Shree Sagar.

Government Girls High School, 13th Cross
The building was earlier a private palatial bungalow that belonged to H V Nanjundaiah, the first vice chancellor of Mysore University. He donated the building to the cause of girl’s education. Sujatha said, “I think Krishnaraja Wodeyar IV was the best. During his tenure, lot of educational institutions and industries came up. It was the golden period of the state.”

K C General Hospital, Malleswaram Circle
One of the city’s oldest hospitals, this government-run multi-speciality hospital located at Malleswaram Circle  is said to be named after Mysore princess Kempu Cheluvarajamanni. Sujatha said, “A hospital was necessary as the city was hit with plaque.”

Malleswaram Market, Sampige Road
Sujatha said, “This was the BBMP land and around 50 years ago. This was given to about 200 shopkeepers. It was leased out to them at `150.” A few years ago, the BBMP said they want to bring down the building as it is dilapidated and gave it to BDA to develop a shopping complex. The shopkeepers who made appeals to the High Court were given makeshift shelters to do their business. “When I interviewed a vendor, she said her livelihood is doomed. The authorities promised them a floor in the complex but how can they afford the rent?,” she asked.

Now we are on Telegram too. Follow us for updates
TAGS
bengaluru Malleswaram temple